A New Era Of Financial Uncertainty

A new era of financial uncertainty could eclipse this coming bear market which is now in sight.

With October’s recent rout in stocks now appearing to be more than just a seasonal sell-off, many investors/traders are beginning to realize that the longest stock bull market in living memory could have expired. In anticipation of this new era of financial uncertainty Wall Street titans have already positioned their portfolios to capture profits from what they believe to be a pending bear market.

Reading between the lines the big players move is the writing on the wall that reads, financial uncertainty and bear market insight.

Think about it, why else would Israel Englander be extending lock-up period, or Dan Loeb decide to reduce exposure and be a net seller of risk assets within next few month or Ray Dalio say on mainstream that he believes that we are in a similar period to the late 30s and talk about the mismatch of supply and demand for US treasuries. Put another way, Ray Dalio has also said that spiraling bond yields could trigger the next recession.

But in this new era of financial uncertainty could this pending bear market be the worse in our lifetime?

Here is why I believe this new era of financial uncertainty will contribute to a bear market with sharper claws and teeth. 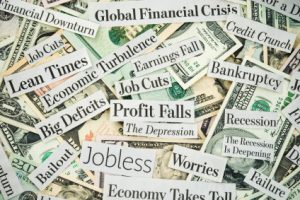 Shareholder maximization under a system of global capitalism is at loggerhead (maybe even no longer compatible) with today’s western democratic system. Great industrialists of the previous century comprehended that they needed to pay their workers enough so that they could purchase the products that they made.

So Henry Ford understood that raising wages would bring him more profit.

For the last several decades shareholder maximization meant reducing wage costs by outsourcing labor-intensive parts of the operation to cheap labor cost regions. More recently it has also meant the eliminate flesh labor from the production process where ever possible, replace humans with robots.

This lead to the “hollowing out of the middle class” in developed economies, bearing in mind that this socio-economic group derives their income from wages rather than return on investments.

Eliminating the middle class in developed economies could be doing more than “hold back the economy”, according to the IMF, it also fanning the flames of political financial uncertainty

For the first time in a generation, millennials will experience lower living standards than their parents. Many in this group will be unable to purchase their own home because real estate prices are unaffordable, many are no longer buying automobiles, they will struggle to find stable work, rent “micro-apartments” and will not own anything other than what they inherit. Globalization is not working for the majority, it has turned millennials into 18th-century Russian serfs.

So when the growing disenfranchised middle class and frustrated youth turn to the ballot box they will reject the moderates and vote for the extremists’ parties in the belief that these political parties might actually do something to better serve their interests.
Some will see popular nationalism as a solution, other (particularly the idealistic youth) will swing to the far left and vote for socialism/ communism. For young people, socialism is more popular than capitalism.

If the rise of nationalist protectionism, the disruption to international trade from the right doesn’t lead to financial uncertainty then the rise of socialism from the left will

The idea of universal income is a socialist solution to the problem of today, a shortage of good paying work that pays a living wage. But who is going to finance people to be unproductive?

Eventually, universal income idea will run out of some-elses money. How long would it take bond investors to figure out that lending money to the government so that it can go into debt to pay their youth to be unproductive is a bad investment?

A new era of financial uncertainty could come about by the perceived decline in absolute power of the US. What if US hegemony fightback fails?

China/Russia already see a global power vacuum. Washington no longer views China as being compatible with its interests or values, it is the end of strategic engagement beginning of the strategic competition. China is now being perceived as a competitor, some say threat. A new US-China cold war is evolving and what will the end game be-a hot war?

Moreover, Europe’s transatlantic rift is accelerating. Macron talks about an EU Army to defend against the US. So the EU is no longer about a common trading bloc, a political union but about building a superstate, a global power that will rival the US.
Financial uncertainty form a multi poller world is a threat to the status quo of USD hegemony.

The stronger the EU the more capital flows out of the US and vice-versa.

The Fed’s greatest monetary experiment to save the financial system has come at a huge cost. The bubble of bubbles has created wealth inequality not seen since the 20s. But all bubbles burst and it is unclear what the monetary authorities have up their sleeve to solve the next crisis.

Financial uncertainty could come from rising Treasury yields which would have an impact on the borrowing costs around the world, bearing in mind that the treasury 10 year is a yardstick for gauging the cost of credit for everything.

So financial uncertainty could make this coming bear-market a memorable one.
Stay tuned.