Could bear markets have become obsolete in the post 2008 financial crisis era?

In the new age of financial engineering and algorithmic trading zero gravity in prices has become a reality. Zero gravity is making bear markets obsolete. Market cycles have merged into a timeless bull market where prices either float or head upwards in an emptiness of seemingly infinite central bank liquidity.

So have bear stock markets become obsolete where lower prices are no longer an option? 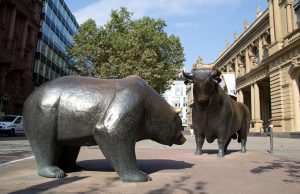 If bear markets have become obsolete then price discovery has no significance in zero gravity where all that matters in this somewhat surreal cocoon market environment is the level of central bank liquidity.

Maybe then bear markets have become obsolete in a topsy-turvy world and to get a true perspective you too might need to step get out of your comfort zone, rotate with it then the more you’ll notice how warp everything is. What if mainstream news were “fake news” and monetary stimulus actual does the reverse, it deprives the productive economy of capital, creates a boom in speculative investments and creates a trickle up wealth-effect.

Perhaps that explains why bear markets have become obsolete. The greatest monetary stimulus experiment in the history of finance, the central banks quantitative easing (QE) asset purchase program which entailed pumping trillions of dollars into the financial system post 2008 financial crisis has created a stock bull market by default -a boom in speculative investing.

But assuming that bear markets have become obsolete, courtesy of the central bank’s QE zero gravity effect on financial asset prices that will only add to the trickle up wealth effect and further collapse of the middle-class. Wall Street is currently experiencing a deal making boom in merges and acquisitions as I write this piece a record $1.7 trillion of M&A deals are underway.

But let’s be frank, who really benefits from M&A activity, a small circle of elite Wall Street firms. Moreover, M&A is all about big is beautiful, in other words more monopolies and big banks love lending money to monopolies because the risk of a loan default is low.

Again a small circle of elite bankers benefit from funding monopolies which extract monopoly profits. But M&A culls jobs as companies merge divisions and less competition in the market leads to higher prices.

So bear markets have become obsolete. The stock market rallies on M&A activity, more workers get laid off, prices rise and the trickle up wealth effect continues as the middle-class get squeezed down the income scale. Middle-income Americans are no longer in the majority, according to Pew Research Centre.

The above scenario is actually playing out and it is not some closet commie view being pedaled- just key into google, “Poor America: 40% of Americans Can’t Afford Middle-Class Lifestyle” and you’ll notice that most people are living pay-check to pay check. Moreover, in other advanced economies the middle-class is fading into oblivion.

Europe has been hit by the Great Recession (which for the many never ended). Moreover, the Middle-Class is in free fall in emerging markets, particularly Latin America as the region battles a USD squeeze and capital flights.

But the macro economic fundamentals no longer matter because in this brave new world of zero gravity bear markets have become obsolete. Fundamental analysts will rightly point to a raft of data which indicates that the global economy is slowing down.

They will point to stagnating wages, lackluster consumer demand in the world’s largest economy the US and troubling demographic statistics, the fact that birth rates in advanced economies just are not happening. The working age population is shrinking, meanwhile the elderly dependent retired age group is ballooning.

Bear markets have become obsolete at a time when credit growth continues to slow, a clear red flag for consumption going forwards which usually leads to recessions.

There is more headwind for economic growth, geopolitical uncertainties in the Middle East is leading to supply side shocks in the crude oil market. The cost of oil (the cost of everything) is going up and there is a rising risk of stagflation of the 70s where input costs are rising in a backdrop of falling demand.

Bear markets have become obsolete in a climate of unprecedented monetary easing. But what happens if stagflation rears its head again, like it did in the 70s, surely then the central banks will start tightening faster than the market anticipates.

Perhaps the min taper tantrum in emerging markets during mid May is merely a small tremor, a canary in the coal mine. Higher Fed fund rates which usually leads to higher borrowing costs for households and businesses typically tanks the stock and bond market.

But what if bear markets have become obsolete?

Post 2008 financial crisis was the greatest stock bull market by default and waiting for the bear market was like waiting for Godot- it just didn’t come and it was a costly mistake not to have jumped on the central bank’s QE inspired rally in everything.

So as the soft date (sentiment surveys) and hard date (macroeconomic data) points to a deteriorating economic environment, stocks trade at near historic price earnings highs and the wealth inequality flags up political instability- should investors/traders worry?