The third round of Brexit talks is on a road to nowhere. Could we be seeing some Back-Pedalling Brexit? Apart from the exchange of many insults from both parties Brexit negotiations have thus far been unable to agree on anything meaningful.

So just how will Britain conduct its trade with its largest trading partner, the EU which is worth £211billion and helps support 4.2 million UK jobs? The answer continues to remain misty with a Back-Pedalling Brexit. 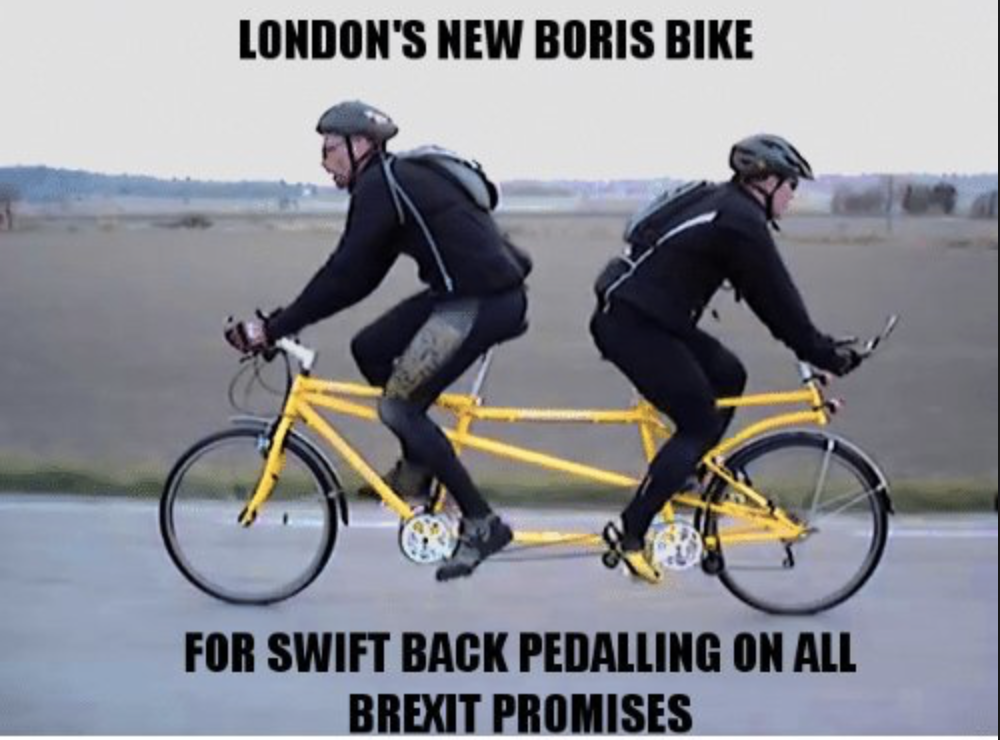 Frankly, it beggars belief that the UK would even conduct a referendum on Britain leaving the EU without knowing what the road ahead would look like. Moreover, there has been no praise for the Brexit negotiation team which has been described as being totally disunited, dysfunctional and lacking preparation.

Whats more, it could get worse before it gets better. Indeed, at this rate, Brexit could spin off into a political crisis at the highest level in British politics. A lack of any progress from the Brexit negotiations is chipping away at PM Theresa May’s political capital which could be making her tenure look jaded. Political heads might soon roll. Could a May resignation be on the cards? It is a possibility.

Meanwhile, Brexit’s white knight, Lord Buckethead (and I am not joking) has entered the ring vowing to lead the Brexit charge. But a growing number of people want the UK to keep its links with the European Union. Indeed, thousands of protesters this weekend (September 9) took to the streets of London to call for a U-turn on the decision to leave the EU. In other words, we could be seeing the beginning of a “loud and powerful” movement.

Former Liberal Democrat cabinet minister Sir Ed Davey told marchers he had “gone from anger to distress, from fury to despair”. He added: “Since the Brexit negotiations begun there’s a third emotion I’ve been feeling – embarrassment. “Embarrassment at our country’s leaders. Embarrassment for Great Britain.”

But on the foreign exchange (forex) market “embarrassment for Great Britain” is cruel and can only mean one thing. GBP is being beaten up by forex dealers. November 2015 the pound was hovering around 1.42 and today (September 2017) it is around 1.10 to the Euro.

XE’s free live currency conversion chart for British Pound to Euro allows you to pair exchange rate history for up to 10 years.

Put another way the pound has devalued (perhaps crashed is more appropriate) by approximately 30% against the Euro in less than 2 years (around about the time when the Brexit referendum was being floated about by former PM David Cameron).

So today, GBP is Europe’s Argentinian peso being amongst the world’s worse performing currency branded together with the Nigerian Naira and the Mexican peso. For the UK, the collapse in the value of GBP is more than an embarrassment, it is economically damaging and hurts its people!

For those of you who believe that a devalued (or in the UK’s case crashed currency) is good for trade because it makes the country’s exports more competitive think again.

Since when has a country devalued its currency to economic prosperity?

In fact, when a country’s currency collapse (due to political turmoil) so too do people’s living standards. A devalued currency means peoples purchasing power falls due to inflation. Many of the inputs used in UK manufacturing (what is still left of it) are priced outside the GBP. For example, the metals used in manufacturing, iron ore, copper and crude oil are all priced in USD. So a plunging exchange value of the pound raises input costs for UK manufacturers.

Furthermore, despite GBP collapse in exchange value against the Euro the UK still has a trade deficit with the EU of approximately £70 billion. Put another way, the UK buys £70 billion more goods and service than it sells to the EU.

So the devaluation of GBP is not ramping up UK exports to the EU to the extent that it has wiped out the UK’s trade deficit with the trading bloc.

But let’s not forget the fiscal reason why Brexit would be a bad (mad) idea. Brexit would lead to a 7.5% fall in UK GDP and $45 billion loss in tax revenue (according to the UK Treasury).

Furthermore, nations are competing on the global stage for international sovereign bond investors which is turning into a competitive beauty contest. Oil deflation means many of the Sovereign wealth fund (SWF) countries have less cash to invest. Meanwhile, many of the developed countries have stagnating economies, aging populations with diminishing tax revenue. So they need to borrow more on the international bond market to keep afloat.

The UK Debt Management Office (manages the sale of gilts) needs to raise on the competitive international bond market approximately GBP 11 bn every month to keep the lights on. But Brexit would make gilts less attractive, who would want to invest in a sinking economy.

In the absence of foreign buyers, the Bank of England could buy gilts but that would lead to devaluation of GBP and eventually hyperinflation. Time for a Back-Pedalling Brexit!

Tory (Conservative) peer Baroness Patience Wheatcroft told demonstrators that Remainers needed to keep campaigning to stay in the EU.
She said: “We have to stop Brexit. Since we joined the EU we’ve had an unprecedented period of peace and prosperity. It must be right to try and maintain that.”

The People’s March for Europe is a movement that is likely to grow as more people come to see the reality, that Brexit is a slow train crash. It first starts with a disorganized government, followed by a political crisis, a currency collapse and squeezed living standards.