Capital flows are the holy-grail of forecasting future asset prices. If a trader/investor can solve the puzzle of where capital flows into and out of next then he/she can forecast the trajectory of financial assets prices with a high degree of accuracy.

The US 10 Year Treasury Note is the financial instrument that has the most impact on global capital flows.

What are Treasuries and how do they have an impact on capital flows? 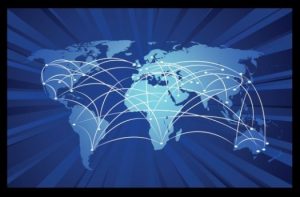 A Treasuries Note is a government debt instrument issued by the United States Department of the Treasury to finance government spending as an alternative to taxation.

Treasuries are fixed income instrument that pays the investor yields on the capital invested. The original amount is then returned to the investor on the treasury’s maturity date which can either be long term or short term. Treasuries market is the largest in the world, it is worth $15 trillion. Moreover, treasuries are at the center of global finance and economics.

What is an inverted yield curve?

For example, the yield curve inverting occurred before the 2008 housing market crisis in December 2005, almost three years before the crash. The last seven US recessions were preceded by an inverted yield curve. Perhaps another inversion of the yield curve be on its way.

When investors are optimistic about the future economic prospects capital flows out of long-term US Treasury bonds, fixed incomes and into growth stocks with the aim of scooping up potential higher dividends from stocks. In the booming economic cycle potential, higher dividends from stocks become more attractive to investors than relative to low long-term fixed-income yields.

View how the yield curve looks when investors are optimistic about future economic prospects.

But with the US 10 Year Treasury note yields hovering near 52-week highs the Fed could also inject more capital flows into the market, thereby suppressing yields from going higher.

When yields rise, stocks fall and the USD appreciates this means there is a sell-off in US debt and stocks. This would be a bearish scenario where capital flows out of stocks and bonds and into cash accounts.

The Fed quantitative tightening, where the Fed unwinds its balance sheet. The Fed chair’s higher loyalty means that the Fed chair Jay Powell who is continuing with the Fed policy of monetary normalization (which requires further fed fund hikes and quantitative tightening where the central bank unwinds its massive 4.2 trillion dollar balance sheet) is likely to clash with US President Trump.

The current US administration’s trade war and one trillion dollar infrastructure spending plan could all be legitimate concerns that are keeping foreign investors at bay.

“Foreign Buying of U.S. Treasurys Softens, Unsettling Financial Markets” according to a recent piece in the Wall Street Journal.

Investor pullback has fueled a bond selloff and shaken a nine-year-long rally in stocks. Overseas investors, traders and central bankers are buying fewer Treasuries. Foreign capital flows into US Treasuries have been declining over the last decade. Foreign buyers now hold 41% of outstanding Treasury debt, their lowest share in 15 years, down from 50% as recently as 2013, according to U.S. Treasury data.

So foreign pullback is also adding to the bond sell-off, which has driven the 10-year yield to 3.17% and that has somewhat rattled the nine-year-long rally in US stocks.

But when capital flows out of Treasuries it not only increases yields, it also has an effect on the real economy by raising companies’ and investors’ borrowing costs. Higher borrowing costs reduce household demand and increase business costs which in turn dampens investor’s appetite for dividend-paying stocks.

“Yields are rising to reflect a risk premium, rather than healthy growth,“ said Mark McCormick, the North American head of foreign exchange strategy at TD Securities. “People are concerned about how reliable a store of value the dollar is right now.”

So when capital flows out of the US 10 year causing yields to spiral above 4.5%, gold rallies above 1440 USD and the USD falls then that is when I believe there may be trouble ahead. Until then all is good.. that’s my 50 cents worth.