Perhaps financial markets are on the central bank’s rate lift-off launch pad, if so buckle up. Stayed tuned to this weeks storm of news as July slips away and we enter August. 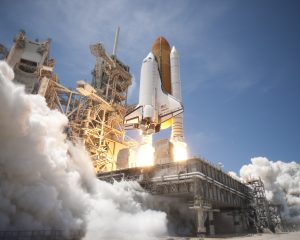 A melting pot of central bankers from the US, Japan, the UK, Brazil, and India all meet to set their respective monetary policy. Such as an eclectic mix of central bankers across the globe setting monetary policy in the first week of August is likely to give investors and traders a good feel for the trajectory of rates. My guesstimate is that global rates are heading upwards, vertically upwards in a central bank’s rate lift-off.

Watch out for signs of a potential central bank’s rate lift-off as the governor Bank of Japan (BOJ) is scheduled to meet on Tuesday, July 31 for the BOJ rate decision. Market watchers expect BOJ rates to be kept at -0.10%.

But with rising input costs speculation is growing that the BOJ could flesh out its plan to eventually ditch negative interest rate policy, bearing in mind that emergency monetary cannot continue indefinitely, it is unsustainable. The consensus among 44 economists surveyed is that the BOJ will keep rates unchanged. Nevertheless, watch out for signs of a policy change in the BOJ monetary policy statement also due out July 31.

A raft of macroeconomic data is scheduled to be released in Europe, July 31. EUR Euro-Zone Consumer Price Index Estimate (YoY) (JUL), which is the key gauge for inflation, is expected to reach 2%. But don’t be surprised if the euro CPI overshoots 2%, the cost of raw materials, energy, packaging is all spiraling upwards.

Moreover, don’t read too much into the ceasefire in the transatlantic trade skirmish that Donald Trump and Jean-Claude Juncker, the president of the European Commission, agreed to at the White House on Wednesday may prove to be only temporary.

What if the so-called US trade deal with the EU is all hype?

But its the Fed’s, central bank rate lift-off which could be virtually a done deal, bearing in mind that the US economy is heating up with 4.1% GDP in the second quarter of this year. Interpreting the data, that means the US economy grew at its fastest rate since 2014.

So don’t be surprised if the Fed plays a hawkish tune, bearing in mind that the US economy is firing on all cylinders in a backdrop of rising input costs.

The US Fed Chairman Jerome Powell will meet on Wednesday, August 1. The Federal Open Market Committee (FOMC) s expected to keep rates at 2%. The Fed could be embarking on a rate lift-off. Moreover, with inflation rising (even using the official figures) rate hikes could indeed be on a vertically upward path.

The Fed rate lift-off could also have political undertones

US President Trump’s protectionist stance could be used as a smokescreen to disguise the fallout of quantitative tightening (QT) and rate normalization.

Trump is also now taking credit for the economy’s upbeat performance. Then logically the finger of blame would be pointed back to Trump (not the central bank) if there were a financial crash and an economic downturn.

Note that despite all the talk about the Fed’s great balance sheet unwind has yet to happen with 4 trillion USD of assets still on the Fed’s balance sheet. So the impact of QT (the Fed’s great unwind) could be about to play out, bearing in mind that US midterm election is set to take place Tuesday, November 6, 2018.

So here is the sixty-four million dollar question; Is the US President Trump the Fed’s fall guy or is the FED and the US President rowing the boat in the same direction? If we start seeing Fed rate lift-off before the midterm then you have got the answer.

The Fed has its finger on the QT trigger. Put another way, through Fed rate lift-off and QT the world’s central bank by default can also indirectly influence US midterm elections by financially engineering a crash.

If, so then that will likely be confirmed in the Bank of England rate decision scheduled for August 2.

The consensus is that the BOE is expected to raise rates to 0.75%, the highest since 2009. However, not every policy maker is expected to back that decision due to the risk of the UK crashing out of the EU, as a disorderly Brexit comes home to roost.

So in an attempt to prevent an Emerging market currency crisis central banks are all embarking on a rate lift-off. For example, the Reserve Bank of India raised its benchmark interest rate in June for the first time in four-and-a-half years, citing growing inflationary concerns and is contemplating a second rate hike.

Moreover, Mexico’s central bank also embarked on a rate lift-off again in June to 7.25% (a seventh straight time) and a peak not seen in nine years.

So in a rising risk of stagflation central banks around the world are all embarking on a rate lift-off which also means the era of cheap credit might be coming to an abrupt end.