Credit is tightening and it would not be eye-deceiving to suggest that a 2018 credit squeeze, similarly to the one experienced almost a decade ago in 2008, is a potential black-swan meandering the lake of risk.

A credit squeeze could be imminent, according to market watchers who follow the “credit cycle”, which is the phase of access to credit by borrowers. The beginning of a credit cycle is characterized by funds being relatively easy to borrow, interest rates are kept low, lending requirements are lowered and there is a credit expansion.

So post-financial crisis 2008 followed the reverse of credit tightening, in other words, the beginning of the credit cycle. 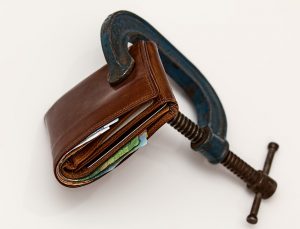 Almost a decade ago central banks implemented the greatest monetary easing experiment in the history of finance. It was believed that monetary accommodation (also known as emergency monetary policy) which entailed near zero interest-rate policy (ZIRP) and injecting the financial system with an unprecedented amount of liquidity through the central bank’s asset purchase program, known as quantitative easing (QE) would prevent a financial meltdown and the Great Depression.

But a decade later and the credit cycle is maturing, credit is contracting and a credit squeeze could be brewing

Let’s look at the facts. Interest rates are climbing. The Fed has raised now six times in a steady trajectory of rate hikes that began in 2015. So the world most powerful central bank the Fed is tightening to combat a new threat, inflation perhaps more accurately said stagflation which is when prices rise during lackluster economic growth. If a picture says more than a thousand words, then the annual inflation chart here says it all.

Notice how there was a marked picked up in inflation since the beginning of 2018 and that every spike in inflation corresponds to a jump in oil prices.

So a credit squeeze triggered by rising Fed fund rates due to a cost-push inflation from higher input costs, namely oil could play out. Higher oil prices could force the Fed’s hand. Supply-side shocks, whether it be crumbling infrastructure in Venezuela and or ongoing geopolitical uncertainties in the Middle East has sent oil prices spiraling. But whether the oil rally continues could also depend on how the big oil producers (OPEC and Russia) respond to this changing supply environment. Indeed, already the oil rally is unwinding as Russia, Saudis aim to increase output.

So the impact of this pending credit squeeze could be lessened by an increase in oil supplies from the world’s major oil producers. That would then re-balance any supply shock, send oil prices lower and keep cost-push inflation under control, thereby giving Federal Reserve’s new chairman, Jerome Powell the option of following a “patient” approach towards monetary normalization.

Moreover, the impact of this pending credit squeeze is the aggregate sum of the Fed and the other western aligned central bank changes in monetary policy. For example, if the Fed decides to continue tightening but the BoE does the reverse and accommodates with near ZIRP or QE due to the contractionary impact of Brexit. Equally, the ECB could decide to extend QE from 30 billion euros a month to say 60 billion euros a month to plug a one trillion euro in nonperforming European loans.

So in short, a credit squeeze could be cushioned if the Fed tightens but the ECB and BoE accommodates.

Back then the Fed was contemplating a move to monetary normalization which entailed several rate hikes and a winding up of QE. When the market got wind of a Fed’s monetary tightening, emerging market stocks tumbled together with bonds and emerging market currencies.

A repeat of the 2013 Taper Tantrum is currently playing out. Argentina has gone cap in hand to the IMF and is seeking an IMF loan to stem off a credit default as peso selloff resumes. Venezuela, Mexico and Brazil are all under stress. In this credit squeeze environment, emerging markets are no longer attractive for investors.

Signs of a credit squeeze are playing out in Europe too

Europe’s largest bank Deutsche Bank continues to circle the drain and its latest result of a net loss of £1.9 billion (€2.2 billion) in the fourth quarter of 2017 shows no respite in the bank’s dire situation.

What’s more, how will Europe’s one trillion euro mountain of nonperforming loans perform in a credit squeeze? Europe’s peripheral sovereign debt crisis is on the horizon again, credit spreads are rising and the single bloc currency is beginning to slide against the dollar.

Further evidence of a credit squeeze can be seen with the stress in US junk bonds (high-risk credit). When credit becomes expensive and the economic cycle turns down the first loans to default are risky borrowers with poor credit scores. So investors in junk bonds scramble for the exit. In a credit, squeeze watch out for the junk bond trade blow up as Junk bond prices collapse sending their corresponds yields higher.

But the real reason why I believe that another credit squeeze or (credit crunch) is likely to play out again and here is the zinger said by the IMF’s Christine Lagarde: “When The World Goes Downhill, We Thrive“.

So a credit squeeze, recessions, economic hardship are all financially engineered in order that the current debt-money system can not only survive but thrive. Perhaps we should thank Christine Lagarde for coming on stage to tell us the truth.

This pending credit squeeze has certainly a big hill to go down, bearing in mind that the world has never seen such an expansion of credit. In this mother of all credit squeeze just what will be the sacrificial lamb, emerging markets, the peripheral countries of Europe, Deutsche Bank, the euro?