The endless growth story is flawed. Think about it. What happens to economic growth when every available space of land is developed, when all the necessary infrastructure is built, when innovation is exhausted and all untapped markets are exploited?
That is the point when the economy has reached peak growth-the economy can’t grow anymore.

Should then the endless growth story be put on the fiction shelf?

From the above, it would seem obvious to most that infinite economic growth is impossible.

A chart plotting US GDP from 1947-2017. Notice how the trajectory of the GDP trend line is distinctly slopping downwards. The US economy reached peak economic growth during the mid-50s with GDP averaging 4.39%. It was during the post WWII period when the wheels of US manufacturing industry was spinning at full speed. Moreover, the US manufacturing had no real competition, bearing in mind major rival manufacturers in Europe, particularity Germany, and Britain was crippled due to years of war.

Notice (from the chart) that the golden 50s era, the endless growth story is no longer playing out. In fact, during 2007-2017 the US economy experienced the lackluster economic activity of just 1.37% during that period. 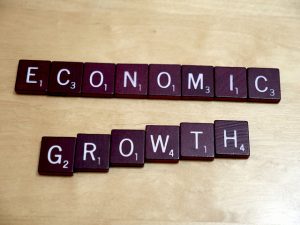 But you don’t have to be macroeconomic chart watcher to figure out that something is wrong with the endless growth story. Signs of slower lower growth are everywhere for those who care to look. For example, the dwindling middle class, the widening wealth gap, collapsing fertility rates in developed economies and the sobering fact that (if this economic trend continues) millennials in advanced economies will be first to earn less than the previous generation.

But that is not how it should be. In a vibrant system, each generation is usually better off than their parents.

In pursuit of profits to chase that endless growth story dream businesses are forced to compete and deploy cutting-edge technologies to achieve operational efficiency. In other words, the endless growth story is achieved by increasing market share through cost-cutting, undercutting rivals and eventually driving them out of business.

The Amazon effect comes to mind. It is fair to say that Amazon, the online retailer has brought a phenomenal amount of choice to consumers.

But it comes at a cost. Amazon’s operation efficiency has disrupted the entire retail landscape and eliminated jobs. Though the actual extent of job loss is hard to determine according to research by the Institute of Local Self-Reliance (ILSR), in 2015 Amazon’s impact on jobs in the U.S was a net loss estimated at 148,774 jobs. Not having a physical presence or employees in certain states also saved Amazon sales tax

If the endless growth story is built around businesses using the Amazon model then the Amazon effect could trigger a deflationary cycle. So lower prices mean lower profit margins, that cause more cost-cutting which adds to higher unemployment, lower household demand, even more, cost-cutting and the cycle continues.

The endless growth story in pursuit of profits could paradoxically end up consuming capitalism , where poor quality goods are sold near zero (because the human workforce has been displaced by autonomous machines). Goods are cheaper today but the quality has deteriorated.

“Amazon is doing great damage to tax-paying retailers. Towns, cities, and states throughout the U.S. are being hurt – many jobs being lost!” tweeted US President Donald Trump August 16, 2017

“They’re not making money in retail, and they’re putting retailers out of business,” Simon said. “It’s anti-competitive, it’s predatory, and it’s not right.”

So the endless growth story could also destroy value.

Central banking could be another example of where the exchange value of fiat currency has been eroded to keep the endless growth story illusion alive.

In an attempt to keep the debt-fuelled recovery afloat the world’s central banks (a private banking cartel) has lowered interest rates and allowed governments to get deeper and deeper into debt. This has meant that the debt level has been growing at double the rate of income.

Notice how debt has been growing at double the rate of income. But an endless growth story based on exponential debt is unsustainable. The compound interest on the debt will eventually rise to a level where the debtor can no longer service the interest on the debt and the outcome will be a default on the debt- it is basic mathematics.

Moreover, the proliferation of debt through lower interest rates reduces the quality of the debt and in a debt monetary system where debt equals currency that equally destroys the exchange value of fiat money. Cryptocurrency – Stellar rise in value is a vote of no confidence in the status quo

So what are the likely scenarios to this flawed endless growth story?

The worse case scenario is that history is repeating. Governments are saturated with debt, exhausted of ideas and democracies are choosing popular nationalism, protectionism, trade wars as a solution. Could the war cycle be playing out again? There are some concerning signs, the deterioration in geopolitics, the collapse of liberalism and the embracing of strong-arm leaders. That path sounds familiar.

The super rich are planning bolt-holes in far-flung corners of the world. What do they know?