The FED’s Next Move

I picture an oracle sitting on a mountaintop pondering over what the Fed’s next move will be. Buckle up for some volatility because the stock market is at a crossroad-it could get dicey going forward.

Whether this recent financial smash up is the end of this secular bull market in stocks and the beginning of a new secular bear market, or perhaps this recent sell-off is a healthy bull market correcting itself and then will go on to make new highs depends primarily on the Fed’s next move. 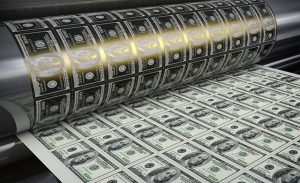 The Trump administration has scored a recent victory for the Bull market, namely the US tax plan to repatriate offshore profits, a stockpile of $2.6 trillion of US corporate profits is a tailwind for stock bulls. This lower rate for repatriated profits could increase US investment. Capex spending (investing in plant and machinery) would have a positive impact on the domestic economy-boosting employment and consumption.

What would the Fed’s next move likely be in this scenario?

With input costs rising due to an increase in productive investment, particularly wages for skilled workers the Fed would be under pressure to keep raising rates.

Put another way repatriated profits could lead to higher inflation and as inflation approaches the Fed’s mandate 2% inflation rate the Fed might be tempted to keep tightening, raising rates further, thereby leading to higher borrowing costs and that too could lead to a drag on CapEx spending. In short, the positive impact of repatriated corporate profits could be canceled out if the Fed’s next move is to raise rates and continue doing so going forward.

What if the repatriated profits go into speculative investments?

All of the above is assuming that some of this stockpile of $2.6 trillion US corporate profits sitting in tax havens will go into productive investment. What if the corporate titans take the easy road and repeat what they have been doing, in other words, stock buybacks?

Corporate stock buybacks is a no-brainer for the CEO, bearing in mind that it increases shareholder value by inflating stock prices and flatters PE ratios (by reducing the number of stocks in issue).

The stock buyback scenario would keep the bull market running for a little longer as it would channel investments into speculative activity fuelling stock prices higher. But the productive economy would be deprived of capital. It would keep a lid on inflation, prevent wages from spiraling. So the Fed’s next move in this scenario would be to reduce their tightening. Nevertheless, we would probably see more of the same, low worker participation rates, a widening wealth gap (bearing in mind that only the wealth derive most of their income from capital appreciation and not wages) and political instability.

But to get a handle on the Fed’s next move we’ll need to unplug ourselves from the mind control matrix stand back and take a look at the bigger picture.

The Fed (is a private banking cartel) It is undoubtful the most powerful institution on the planet with interests that go far beyond US sovereign borders.

The Fed owns the copyrights to the most lucrative product on the planet, USD. It is difficult to comprehend the power, influence and wealth that the owners of the world’s reserve currency possess. By controlling the world’s reserve currency the Fed is able to manipulate commodities, the forex market (through the COMEX derivatives market), the global debt market. So Fed policy is able to penetrate foreign economies at will with the USD being their back-door. The Fed can even indirectly sway foreign policy by cutting funding and aid to countries.

This is what is meant by USD hegemony which is being propped up like a stool on three legs. US Treasuries, the petrodollar and the US military all support the USD on the throne thereby keeping the dollar strong, stable and the world’s reserve currency.

Now let’s switch gears, the well-known function of the Fed is to keep the western financial banking system stable. The financial crisis of 2008 lead to the greatest monetary easing experiment in the history of finance. More than 4 trillion dollars was created by the Fed and injected into the system through an asset purchasing program known as quantitative easing.The medicine worked (thus far) but it has had some bad side effects, asset bubbles is one of them.

Another less known side effect (outside the mainstream) is that the Fed’s massive currency creation has made its largest investor (buyer) of US treasuries the People’s Bank of China PBC skeptical. China is no longer that eager to buy US treasuries. “The west lives in debt-powered by a fiat dollar printing machine” – investors are getting nervous.

Meanwhile, China and Russia are spearheading a rival monetary system (another fiat system) in the most dynamic economies along the new Silk Road. USD hegemony is under threat.

So what will the Fed’s next move be?

Here is one likely scenario Trump is not the Fed’s fall guy, instead he is the war president. The Fed has Trump cornered, either the president will comply or he will be fed to the lions. Trump desperately needs the Fed not to embark on rate hikes and the last time the Fed kept rates low was during WWII to help the Federal government finance the war. The Fed could keep rates low subject to Trump embarking on military adventures.

In other words, the shadow government (puppet masters) could already be working on plan B, which is to set the new silk road on fire.

The old world order is falling apart by the day. History could be repeating itself, people are sacrificed to save the system. There is a sense that something big is about to happen and it will whip investors back into safe-haven assets (the ones that aren’t rigged to the downside). Will it be USD and US treasuries emerging from the ashes?