Has the global economy peaked?

The First quarter corporate earnings season will soon dominate the business headlines and might provide traders/investors with some guidance as to whether the global economy has peaked and heading for a slow down.

But keep in mind that corporate earnings which is a leading economic indicator has its limitations when trying to gauge whether the global economy has peaked.

Put simply, corporate earnings is a backward-looking indicator (it looks at the previous three months of trading).

A slowdown in US consumer spending, which represents 70% of the US economy is an indication that the global economy has peaked.

The link between US consumer spending and the global economy is clear. When US households consume the world’s factories (in low-cost labor regions) ramp up production which then increases global demand for (commodities). Moreover, buoyant US consumer demand is a tailwind for commodity-based economies such as Australia, South Africa, Chile, Argentina, Brazil, Venezuela, Saudi Arabia and Russia).

So if the health of US consumer spending is an indication as to whether the global economy peaked then who are the US main street bellwethers?

Wal-Mart Stores, Target, and Amazon.com are the three main street US bellwethers but Earning Bellwethers aren’t what they use to be.

But when determining whether the global economy has peaked perhaps we need to consider it in the context of rising protectionism currently being spearheaded by the Trump administration. 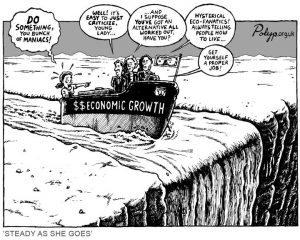 Surely Trump’s proposed $100 billion of additional tariffs on Chinese goods is likely to throw a spanner in the works of the global economy, albeit in the short term. Raising the cost of inputs for US manufacturers is likely to weaken and already lackluster US household spending which could also be a headwind on global manufacturing and the demand for inputs (commodities and labor). In the short term, a World Trade War is likely to fuel cost-push inflation in the world’s largest consumer economy and if the US consumer responds by cutting their discretionary spending then the global economy has peaked.

Indeed, the IMF chief has recently warned that a trade war could derail economic recovery.

Then the global economy peaked view could hold water, bearing in mind the IMF nearly always is over-optimistic in its outlook. So when the IMF puts out a bearish forecast perhaps traders and investors should take note.

However, there is one caveat to the global economy peaked view. What if in the US in the medium to long-term, re-industrialize behind a wall of protectionism and the factories start mushrooming on the industrial landscape and auxiliary component and service businesses prop up to support the new factories and their workers?

In this scenario the US economy would revive and grow. But the extent of a rust-belt revival in the medium, long-term will depend on the degree to which automation has replaced human labor in modern manufacturing.

The Baltic Dry Index (BDIY:IND) can also be used as a gauge to determine whether the global economy peaked.

In a few words, the majority of global trade is transported by sea freight. So when the economy is buoyant demand for freight services rise which also pushes up freight costs, hence the BDIY:IND rises. The latest Baltic Dry Index.

Notice how the BDIY is down 25.77% YTD at 1,014 which suggests anemic demand for freight shipping and yet another indication that global economy peaked.

Take, for example, The University of Michigan’s consumer sentiment which fell to 97.8 in April of 2018 from 101.4 in March and below market expectations of 100.5.

Moreover, eurozone economic sentiment indicators dropped back slipped back from the post-2008 financial crisis high. In March, the Economic Sentiment Indicator (ESI) decreased markedly in both the euro area (by 1.6 points to 112.6) and the EU (by 1.9 points to 112.5) and it is the third consecutive drop.

The health of the credit market is another indicator that could give you a clue as to whether the global economy peaked.

Citi Bank notes that “the Fed has already moved into slightly restrictive territory vs. equilibrium rates and that further tightening from here will be a growth and risk asset negative.” Put another way that is saying the Fed should end its tightening policy.

Moreover, both equities and long-term yields cannot continue moving higher simultaneously. At some point, investors might decide to ditch equities and pile into bonds to benefit from low-risk high yields. Whats more, if the global economy peaked that could happen sooner rather than later.