Hidden Inflation Around The Corner

The central banks have got inflation at an optimum level through monetary policy, that is the official version. So for the major central banks (Fed, ECB, BoE) that means inflation is at or below their target level of 2%. This implies further rate hikes in the US and Europe could be on the cards in 2018. But is there hidden inflation? – how could inflation be so gentle, bearing in mind that the central banks have been implementing the greatest money easing, post-2008 Great Recession, in the history of finance?

Take the blinkers off and you can see hidden runaway inflation. The problem with official data is that it doesn’t include all the pieces, it gives a skewed picture. For example, the unemployed data statically eliminates those who are structurally unemployed (95,000,000 Americans who left the workforce are not counted as unemployed). 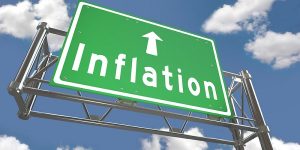 Similarly, the inflation data is misleading. The price of many financial assets is excluded from the data, such as home prices. How relevant is inflation data if it doesn’t include a basic necessity, accommodation-home ownership?

The fallout of massive monetary easing is hyperinflation in many financial assets, particularly real estate. House prices are in a bubble with many major metropolises registering falls. Already Millions have been wiped off value of properties in UK’s wealthiest streets.

The sheeple media blames Brexit, tax changes which “continue to wreak havoc” in UK’s wealthiest streets but there is no mention of the impact of the central bank’s unprecedented monetary easing policy.

When a chosen few are able to create currency out of nothing and then hand it to an elite 0001% of the population that is a recipe for bought politicians, corrupt policies and asset bubbles.

If house prices moved in tandem with wage increases and not a change in money supply (which seems just, more sustainable) there would be no housing bubble.

Hidden inflation can also be seen in the skyrocketing price of crypto-currencies such as Bitcoin’s meteoric appreciation of around 1,500% this year. But look at it from another angle. Bitcoin’s stellar rise in price is also flagging a collapse in the value of fiat currency.

But it is not just spiraling asset prices. We also see hidden inflation in education, healthcare and residential care for elderly are all rocketing. The over-70s are mortgaging their homes to pay for care.

When a home’s price ( valued in fiat currency) increases from 2,500 GBP to 750,000 GBP in 40 years that is also due to hyperinflationary monetary policies.

Have wages increased by 30,000% during the same period?
If so, then why do just eight men own the same wealth as half the world. hidden inflation

So this (look the other way) there is no inflation to worry about doesn’t tally. Rates could rise faster in 2018 then what most market watchers are forecasting.

That could also mean highly leveraged assets (any asset which is purchased primarily with a loan such as real estate, autos, plant, and machines) could tumble in price. Challenging time for banks could lie ahead.