But what exactly is a unicorn?

The unicorns I am talking about aren’t the mythical animal with a horn projecting from their forehead, although that too is a unicorn 😉 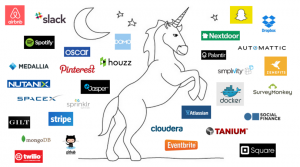 Moreover, what about the cryptocurrency new young budding millionaires. Just how many young millionaires cryptocurrencies have created in 2017 is unclear but the fact that Ferrari is planning to increase its production in 2018 due to a jump in demand for supercars gives us some idea.

But perhaps the most motivating story about investing in startup unicorns is the Californian programmer who convinced his local restaurant to give him two Pizzas for 10,000 Bitcoins, which was then a little-known currency. Those very same Bitcoins today would be worth 130 million USD.

“It wasn’t like Bitcoins had any value back then, so the idea of trading them for a pizza was incredibly cool,” Hanyecz told The New York Times in 2013. “No one knew it was going to get so big.”

So unicorns are typically technology companies that disrupt the status quo. These companies with their disruptive revolutionary innovation create a new market and value network and eventually disrupts an existing market and value network, they displace established market-leading firms, products, and alliances. Unicorns are rebels with a cause and ignoring them, not recognizing and investing early in startups-unicorns will be equally detrimental to an investors portfolio.

How can unicorns damage the performance of an investment portfolio?

Think of how digital technology has revolutionized the way we store and record information.

Digital photography has toppled established players such as Kodak, cloud computing has made digital memory sticks obsolete and the electrification of tomorrows transport could be a potential disruptor to today’s combustion engine builders. Moreover, what about the advancements in robotics and AI – so just let your rebellious imagination run wild and the list goes on and on.

Last year 57 companies became unicorns and collectively, they’re now worth $116.5B, according to Visual Capitalist.

Unicorns range from well-known companies, such as Reddit or Quora, to rapid-risers like China’s Toutiao (now valued at $20 billion), which has seemingly come like a bolt out of the blue. Fortune provides a list of unicorns

Here are some of the red-hot unicorns of 2017
For example, Toutiao (China) based in Beijing is a news and information platform that focuses on recommendations using AI technology.

Coinbase (United States)
Valuation: $1.6 billion The cryptocurrency sector has gone red hot with growth. Coinbase has been riding a rocket since 2012. Coinbase is the most important crypto platform in the US and had in 2017 such a strong influence in the sector, that the “Coinbase Effect” is now dominating traders conversations everywhere.

What are the sure signs that you are investing in startup unicorns?

Unicorns typically involve disruptive technologies spearheaded by outsiders, their founders are entrepreneurial. Unicorns are usually disliked by mainstream and established players because they challenge the status quo. Apple and cryptocurrencies were all ridiculed, called a bubble and even a fraud by established players. Unicorns are game-changers and we are likely to see much more in 2018.

A new and young generation of activist rebels, anarcho-capitalists (which the banks would not invest in) have been enriched (capitalized) by cryptos. Not all of these new young crypto millionaires are going to buy supercharged cars. In fact, some of these millennials will create tomorrows unicorns, after all, they are now capitalized, they have the know-how and the mindset to make it happen.

The risks with investing in startup unicorns in 2018.
Sure, investing in a potential startups-unicorns is high risk, they can be so rare that they can be as difficult to find as the mythical unicorn. Furthermore, in the age of bubbly valuations, investors will need to differentiate whether they are actually investing in a bubble or that elusive unicorn which will make them rich. So cast your net wide might be a good strategy for catching the next unicorn and only invest in what you can afford to lose.

Wishing all my readers a prosperous 2018 investing and best of luck investing in startup unicorns.
Learn Three of Darren’s Best Investment Strategies