NASA spin-off technologies tend to be a good bet

Investing in tomorrows billionaire dollar tech unicorn can sometimes be down to luck, a lottery law of averages. Nevertheless, investors can improve their odds of picking a tech unicorn (and hugely prospering in the process) by investing in companies that have NASA spin-off technologies.

NASA has been transferring technology to the private sector since 1964, through its Technology Transfer Program. Early publication listing NASA inventions were first made available to the scientific and engineering communities for academic, scientific interest. 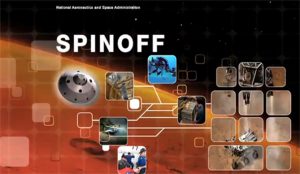 But it was the private sector that was able to exploit the profit potential from NASA spin-off technologies which would also give homegrown companies a competitive edge in technology and innovation.

So as the private sector acquired and adapted NASA technology for commercial uses NASA spin-off technologies products started to emerge.

NASA then presented their success stories of NASA spin-off technologies at congressional budget hearings, which came to be known as black and white technology Technology Utilization Program Reports, published in 1973 and 74.

Public interest was so great that NASA decided to turn the report into a publication for the general public and the first color edition of Spinoff was published in 1976 which has since been published every year to date. Spinoff shares the stories of nearly 2,000 products and services that began as, or have benefited from, NASA spin-off technologies. Request the latest copy of Spinoff.

Now let’s take this full circle with respect to how a traders/investors can profit from NASA spin-off technologies. Investing in the embryonic phase of a technologies unicorn can make an investor very wealthy. But that is typically open to big investors with a sizeable amount of speculative capital to invest. Most retail investors aren’t in that fortunate position.

So how can regular retail investors profit from NASA spin-off technologies?

Say you have1,000 dollars to make a long-term value investment play.

Start making a wish list of stocks you would buy following a stock market correction or crash. Remember that stock market crashes are healthy, it is the transfer of wealth from one group of people to another group.

Put another way, don’t fear this coming correction-see it as an opportunity for you to get in at an affordable price. Central banks are moving towards normalizing monetary policy, in short, it means the end of zombie companies which survive on cheap credit rather than building great products that people want/need with a sound business model. Think of Telsa stocks. So a bloodbath in the technology sector could play out, bearing in mind that many companies in this sector are young and yet to show a profit.

In a few words, many potential unicorn tech stocks with NASA spin-off technologies will probably get oversold in the likely coming stock market correction/crash.

For those of you able to switch off from the doom gloom speak end of capitalism bullshit and see the coming correction as a buying opportunity you are likely to do well.

So combining tech stocks with NASA spin-off technologies and technical analysis to gauge the best entry and exit points in the stock the probability of luck being on your side and making a winning investment is greatly increased.