So what will the next financial crisis look like and more importantly what opportunities could it pose for traders and long-term investors?

One decade on from Lehman’s bankruptcy (September 17, 2008) and the stock market crash of 2008 which triggered a credit squeeze then the Great Recession. Moreover, the greatest monetary experiment in the history of finance which entailed the central banks pumping the financial market with trillions of dollars of liquidity through their asset purchase program known as quantitative easing (QE).

QE is also known as “Monetary policy for rich people,” according to Steve Eisman in his latest interview. Steve Eisman is the trader popularised by the movie The Big Short who forecasted the financial crisis of 2008 and also made a lot of money doing it.

What have we learned from the last financial crisis? 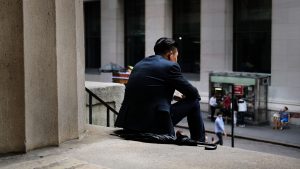 That the naked-ape forms cozy coalitions(groups) and will exploit any opportunity (a crisis) to advance that group’s position. Do you want evidence? Today, a bus-load of rich have the same wealth as 3.5 billion people
.
That could only happen in a rigged system financial engineered to benefit an elite group.

Market timing is a dicey business and frankly to what extent lady-luck plays in making a good call should never be underestimated. The worse quality a trader can have is being overconfident. But having said that the stars are aligned for another stock-market sell off. CBOE Volatility Index, the VIX (or fear index), a forward indicator is moving on the radar again. The 5-day chart of the VIX shows a noticeable spike. The VIX fear gauge tends to spike just before a stock market sell-off that could lead to a financial crisis.

If we are on the doorstep of the next financial crisis what will it look like?

Steve Eisman, in his latest interview, thinks QE has “been a 100% failure” because it fuelled a speculative bubble in assets. “People took all that liquidity and invested in stocks market because it did not cause the economy to grow even 10 basis points faster, ” said Steve Eisman.

The next financial crisis is coming from the corporate sector, according to Steve Eisman.

Indeed, I have referred to this risk in previous postings as zombie companies, these are companies with no sound business models, they have never made a profit but merely exist on the life-support machine of the central bank’s monetary easing policy of ultra-low interest rates.

The era of unprecedented monetary accommodation, the largest of its kind ever, has created a proliferation of zombie companies which now litter the business landscape.

It is a potential minefield for investors, bearing in mind that the central bank’s transition to monetary normalization could wipe out many highly leveraged unprofitable companies that survived on cheap credit. Put another way, the next financial crisis could be in the junk bond market as investors scramble for the exit. Keep an eye on soaring junk bond yields.

So the next financial crisis will look different from the last which emanated from household subprime mortgages. Perhaps the Great Recession has changed households spending consumption patterns. Households are more cautious today than a decade ago.

EM currencies have been taking the escalator down since the start of the year.

Perhaps the next crisis will look like a sovereign debt default in emerging markets as USD denominated loans become more expensive to service. Contagion could spread from those banks most exposed to EM debt.

For stock investors, it could be buying value stocks at a discount. Big data stocks that control the data which they can sell for example Equifax and to some extent Google, Facebook and even Amazon (although an online retailer is also part of big data) have very little competition, they are oligopolistic and likely to keep growing as everything goes digital.

Buying big data stocks at a discount could provide investors with longer-term opportunities.

So think steel stocks like Nucor (NYSE:NUE) and United States Steel Corporation (NYSE:X) and U.S. Concrete. All that heavy lifting means heavy construction-equipment manufacturers like Caterpillar (NYSE: CAT) and United Rentals are going to be busy.

But as the US rebuilds its infrastructure and industry behind trade barriers that will create trade friction and bad blood among its trading partners. China’s export-driven economy is being attacked. The past few decades have seen China’s rapid industrialization, the largest ever as the rural population has been urbanized to work in the world’s factory. What will happen when hundreds of millions of Chinese take to the streets because the factories have closed?

Perhaps US policymakers know that social unrest in China could cause the one-party state to adopt a more aggressive foreign policy. So the next financial crisis could have a trade protectionism twang to it too. But “when goods don’t cross borders, Soldiers will” and that is music to the ears of the military industrial complex. Lockheed Martin continues to fly high.