Have The Oil Bulls Reached A Dead-end?

Forecasting the price of an asset sometime in the future is tricky, even more so for oil prices. Indeed, just a few months ago BP’s CEO Bob Dudley was assuming oil price to be around $55 to $60 for the next five years. Have The Oil Bulls Reached A Dead-end?
BP assuming 55 to 60 dollar oil for the next 5 years 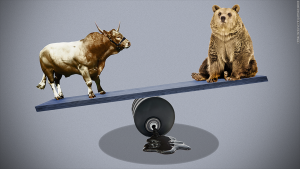 Some pundits were even talking about oil being back up around 100 dollars per barrel range in the medium to long term which would still be well below its record peak of US$147.27 in July 2008.
But all those forecasts were wildly optimistic. Today (July 10) oil is trading below the $50 a barrel threshold at just $44.
So will we ever see oil above $100 price level? Have the oil bulls reach a dead end?

The technical indicators for oil price are bearish. We are seeing lower highs and lower lows at the 50 and 200 day moving average.

Notice that near the highs volume spikes up due to heavy selling, which can be interpreted as a bearish signal.

But it is not just the technical indicators that are pointing to oil bulls being in trouble.

The fundamentals for oil prices are also bearish.
Technology is having a wide-reaching impact on industry, already a visible transformation can be seen from retail to manufacturing and transportation.
So too is technology rapidly changing the oil and gas industry.
For example, new innovations in oil prospecting and drilling has helped to reduce the breakeven cost to just $40–$50 per barrel in places like the Gulf of Mexico (it use to be around $60 per barrel)

A recent piece in Foreign Affairs entitled, “The Next Energy Revolution”.
https://www.foreignaffairs.com/articles/2017-06-13/next-energy-revolution?cid=int-nil&pgtype=hpg&region=br2

states that, “today, thanks to these innovations, the average breakeven prices of new deep-water projects have fallen, to just $40–$50 per barrel in the Gulf of Mexico—an important global bellwether because it is one of the most responsive regions in the world to changes in market conditions. Even though oil prices remain low (and many in the industry expect them to stay low), investment is once again growing. Ten deep-water projects were approved for investment in 2016 and the first half of 2017 alone”

So technology that helps to reduce exploration and drilling costs is positive for big oil profits.
However, there are more disruptive technologies on the horizon that could explain why $100 a barrel might be a thing of the past.

We are at the cusp of a major revolution in transportation and it is the evolution of the engine that is at the heart of this big change. If the internal combustion engine made steam engines obsolete then so too could the electric engine make internal combustion engines (which provided mass transport for the last 100 years) obsolete.
Think about it. If steam replaced the horse then electricity will replace oil as a form of powering road transportation.

So when the French government recently announced that it will ban the sale of petrol and diesel engines by 2040 the recent sell-off in oil was probably not overdone, (bearing in mind that this could become an EU ban).

Is the end of the internal combustion engine just 14 years away?

Already collapsing demand for gasoline (even during the peak summer driving season) is baffling many oil analysts.
http://www.zerohedge.com/news/2017-07-08/bofa-stunned-drop-gasoline-demand-where-driving-season
BofA Stunned By Drop In Gasoline Demand: “Where Is Driving Season?” | Zero Hedge
www.zerohedge.com
US gasoline demand continues to surprise analysts by how weak it is. So weak, in fact, that Bank of America has released a note which has BofA’s stunned energy analyst Francisco Blanch asking “where is the driving season?” and, more specifically, “Is this year’s driving season over before it began?”

Imagine what will happen to oil demand when one of the world’s largest and richest trading bloc with 508 million people is no longer using oil to power mass road transport?
You don’t need to be Sherlock Holmes to figure out that demand for oil is likely to collapse going forward at a time when supply is simultaneously increasing due to technological advancements.

Furthermore, if you throw into the equation the likelihood that OPEC could collapse under the strain, after all, which member State is going to stick to quota agreements when their export revenue is already in free fall. So OPEC, (the cozy cartel that kept prices high for so long) could turn into a nasty bloodletting contest (a price war) with the last few members standing supplying what is left of the world’s oil demand.

But let me illustrate graphically what the carnage on the oil market might look like with a chart.

Economists will point to how technology shifts the supply curve to the right resulting in more supply at even lower price levels. Simultaneous, the demand curve shifts to the left (due to substitutes) and the equilibrium price is a lot lower (the price falls from P1 to P2).

If you are a trader you can probably by now smell the blood.

But before you decide to place your chips sky-high on shorting oil also keep in mind that there is no geopolitical risk premium in the crude price despite ongoing trouble in the region.
For example, the Saudi-Iran conflict continues to worsen as both sides fight a proxy war in Yemen and Syria. Moreover, there is always the possibility of a flare-up in the Persian Gulf.
In fact just four days ago a Saudi ship surrendered itself to the Iranian navy.
https://www.almasdarnews.com/article/breaking-saudi-ship-surrenders-iranian-navy/
Already in the Persian Gulf oil tankers are caught up in a traffic jam, the region is high octane.
A stray missile into the side of an oil tanker could send oil prices soaring and that would make shorting oil a painful trade.

So being short crude is certainly not for the faint-hearted.

Black swan events (events that come as a surprise) make the short crude oil trade very risky in the short term.
Long term the fundamentals and technicals don’t look promising for oil either and that is not good for the long-term investors.
Perhaps the wait and see approach may be best.
Time will tell.