Political risk is brewing again. It is being fermented by an ideology of self-determination and secession. The very existence of states, superstates and multilateral trade agreements (which provide a framework for trade, prosperity, and peace) are now all in jeopardy.

Self-determination, nationalism, regionalism is being pedaled by political opportunists as an answer to the current woes. Perhaps it has its roots in Darwinism survival of the fittest. If so, then the near future means every nation for itself. 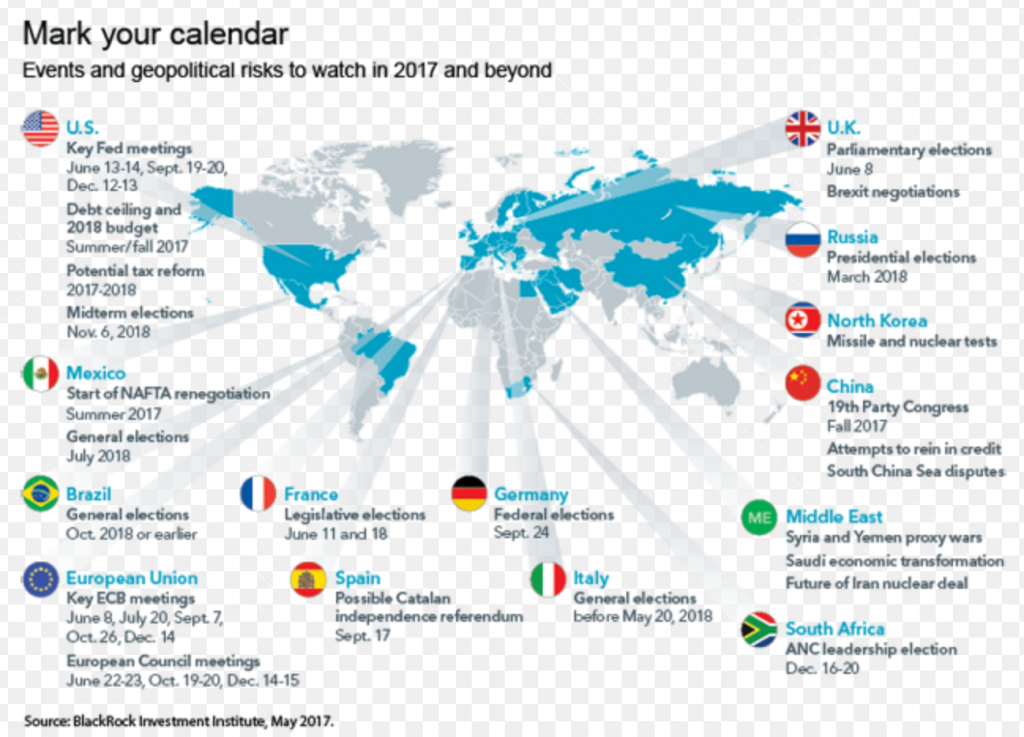 But nationalism and regionalism which are the current political risks brewing are likely to mean less co-operation amongst neighboring countries and regions, more friction and if history teaches us anything eventually war.

Interdependency means survival through co-operation, trade and seeking comparative trade advantages with neighboring countries. Moreover, multilateral trade agreements and trading blocs, such as the EU facilitate the movement of goods, services and people across borders.

Nationalism is the complete reverse. It views neighboring countries as rivals and a potential threat.

So political risk is brewing again in Europe.

Investors and businesses are having to deal with a continuing deadlock in Brexit negotiations. The UK is now 17 months away from leaving the EU but with no framework of what will be in place after that. In other words, businesses have less than one and a half years to make hiring decisions and decide on investment and location plans. That is not a lot of time which is likely to mean that businesses will invest elsewhere.

The political risk brewing over Brexit is fostering a climate of business uncertainty. There is still no clarity as to whether contracts will be valid, what standards will be applicable and whether businesses will face custom delays for their goods post Brexit. This has lead to a decrease in investor confidence amongst some firms.

In short, the UK is already losing out in attracting foreign investment.

JP Morgan last month announced that it was setting up new operation center in Warsaw along with a few thousand jobs.

Had it not been for Brexit JP Morgan would have probably invested in Bournemouth UK.

Moreover, UBS is to move 250 London staff because of Brexit and Transfer Wise’s CEO said if he were setting up the company today he wouldn’t set it up in London. He would go to Berlin instead.

Brexit has yet to happen, nevertheless, it is this political risk brewing which creates uncertainty, causes businesses to postpone orders and cut investment which is acting as a headwind on UK employment, household consumption, and economic growth.

GBP has been punished on the foreign exchange. While the depreciation in GBP for exporters making in the UK has been a success story many companies are reliant on supply chains overseas. So they have been adversely impacted by GBP’s depreciation.

Spain, Catalonia is yet another region in Europe where political risk is brewing again. The crisis surrounding Catalonia’s secession from Spain shows no sign of abating.

To date, Madrid has ignored the implementation of the declaration of independence the risk being that if Madrid cracks down hard on political leaders, demonstrators and other civic bodies in Catalonia, it is possible that Catalan could find the means to arm themselves and fight back. I don’t believe that either side has the appetite for another 1930s bloody Spanish Civil War. Although Catalan public regional education system has pumped its youth with a lot of anti-Spanish ideology. So it is still a possibility, albeit remote.

Moreover, the big political risk brewing is that secession spreads beyond Catalonia to other European states.

Perhaps that is not too far-fetched, bearing in mind that there are at least seven independent movements that could potentially destroy the EU.

All this is likely to keep a lid on EU risk assets, the euro and could explain why ECB President Mario Draghi is extending its bond-buying program of 30 billion euros a month. “There is still a large amount of uncertainty,” said Draghi.

Across the Atlantic to the US and there are ongoing political risks brewing too with the Trump Administration. Whether it be Trump’s nightmare nuclear diplomacy over North Korea or his “America first” mantra which threatens to rip up every trade agreement made from the Trans-Pacific Partnership trade deal to even ignoring the World Trade Organization (WTO).

But the WTO was formed to prevent the world from sliding into trade wars.

So how will future trade conflicts then be settled?

In a few words, head to head using real threats of punitive sanctions.

Trump wants to seek one-on-one trade deals with countries that would allow the US to quickly terminate them in 30 days “if somebody misbehaves.”

At best the world could be sliding into trade wars which could also in the worse case scenario escalate into shooting wars.

All this political risk brewing again does wonders for cryptocurrencies, Bitcoin is behaving like the new gold safe-haven asset in a topsy-turvy world. Defense stocks (weapon makers) also thrive in troubling uncertain times-and there’s a lot of that.