Pot stocks are giving investors a high (no pun intended). If you think successful investing is for the conservative-minded think again. A fund that benefits from pot stocks is up 30%.

The best performing exchange-traded fund (ETF) over the past month is one that has benefited from a flurry of activity in the marijuana industry. ETFMG Alternative Harvest ETF, a pot stock fund, has almost doubled since August. There has been a bit of profit taking since but pot stock investors appear to be standing pat. Investors are married to their pot stocks, they have so much love for the marijuana industry.

The pot stock rally could be more than just a fad 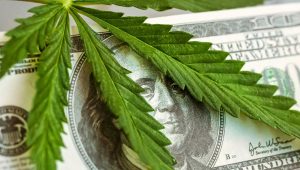 Changing tastes means that the up and coming generation of millennials are saying no to alcohol and yes to marijuana.

A new study from OutCo and Monocle Research shows 51% of millennials in California will replace alcohol for marijuana. Moreover, the research suggests that this shift is likely to accelerate going forward.

Millennials will be more open to diversity in their consumption of recreational substances than older generations, with more than 50% of them substituting cannabis for alcohol altogether. The study shows that one in five Generation Xers will be substituting marijuana for alcohol, as will 8% of baby boomers.

“We are already seeing a decrease in alcohol sales, which means that cannabis is poised to be the new recreational substance of choice for many millennials and beyond”, said OutCo CEO, Lincoln Fish.

Why are millennials saying no to alcohol and yes to marijuana which is causing a flurry of activity in pot stocks?

The report makes interesting reading. Millennials perceive marijuana to be a safer, relatively inexpensive recreational drug which causes less damage to their health.

Participants agreed with the view that effects of a hangover from alcohol lasted the entire next day, while high volumes of cannabis usage had no noticeable lasting effects; thereby making them feel healthier and more active.

Also, automation, robotics, advancements in AI are all displacing human labor but they are also placing a premium on human creativity.Imagine what it would do to pot stocks if tomorrow’s workers started their workday with a joint rather than a cup of coffee?

“A drug-induced altered state of mind may indeed lead to breaking free from ordinary thinking and associations, thereby, increasing the likelihood of generating novel ideas or associations”

Moreover, pro-marijuana legislation could keep pot stocks jolly and all this is lightly to rattle the management of the big alcohol companies who will see their market shares dwindle. Then the old recreational alcohol companies will either die out or become predators. If it is the latter pot stocks could become one big target and “kiss the sky”