The next crisis, a rapidly greying population is likely to provide well position investors with good returns going forward.

Fertility rates, particularly in Europe are too low. Today’s twenty-something have been dubbed “generation pause”. In a few words, they are too poor to start a family.

The Great Recession of 2008 together with the central bank’s hyper-inflationary monetary policy has created a housing bubble and that has made it extremely challenging for millennials to get on the housing ladder, get married and start a family.

There could indeed be a positive correlation between economic vitality and western fertility rates. 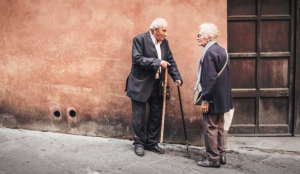 So where are the investment opportunities for investors in this next crisis, a rapidly greying population?

To spot the investment opportunity let me spell out the implications of a rapidly aging population on the economy.

In a few words, the demographic time bomb means higher dependency ratios, rising healthcare costs. So the winners are likely to be pharmaceutical companies, private/public retirement homes, and providers of mobility equipment for the third aged group.

But a rapidly greying population could also mean a shrinking workforce. So this is where technology companies are already rising to the challenge by adapting technology that will make the aging population productive for longer. As long-term value investors, those are the companies you need to start looking into. For example, Skynet.

What’s more, customers are demanding uniqueness in their autos and white goods. So a human (working with wearable robotic technology) could still play a role on a modern production floor.

But if technology makes humans more productive then the total demand for labor (human) will fall. Moreover, if more people are entering the retirement age then that too means less tax revenue. Furthermore, an aging population requires more health care.

So if the state is left to shoulder the bill of higher health costs then the public finances of advanced economies could be hit with a double whammy of declining revenue from taxation and higher expenditure due to escalating healthcare costs.

What does all this mean? The macroeconomic implication; ballooning public deficits could be the norm going forward. There is a financial implication of a greying population too. G7 bond investors could perceive the risk of holding sovereign bond as higher and therefore demand (through the market) higher yields.

But is this rapidly greying population just a storm in a teacup?

Not if you believe the United Nations forecast on population growth of western countries.

Visual Capitalist has animated the rapidly greying population in Europe and the Americas.

In just a decade time the United Nations has forecasted that some European countries will start to have a median age of 50 or higher. This includes countries like Spain, Italy, Portugal, and Greece, and then later Germany, Poland, Bosnia, and Croatia. Put another way, the median age in Europe in about a decade will be middle-aged.

Only the UK, France, Ireland, Scandinavia, and former Soviet countries will be younger – but only slightly so. Median ages in these places by 2060 will be in the early to mid-forties.

Populations in North and South America are also greying fast, though not quite at Europe’s pace.

Here’s a similar map of the Americas that highlights median age between 1960 and 2060, based on U.N. projections.

To put it bluntly, a greying population also means a sunset economy, a less dynamic economy with declining economic activity.

But for those investors with a shorter investment time frame developing trader skills and key strategies could be another way of converting a rapidly greying population into a trading opportunity.