The Real Estate Bubble Index (UBS) might be worth keeping on your investor’s radar. Trillions of dollars of money created by the central banks over the past decade have kept asset prices artificially buoyant and attracted speculative buying.

For almost a decade traders/investors leveraged to their eyeballs with speculative (hot) capital made fast money courtesy of the central bank’s unprecedented monetary easing by buying the dip. BTFD has been (perhaps up-until-now) the best play on the Street, after all the “central bank put” was effectively setting a floor on asset prices. 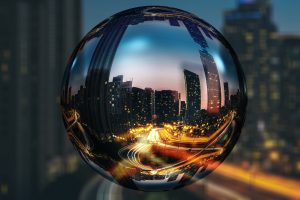 The long duration of low Fed fund rates (which has an impact on all loans, from credit card to car loans to mortgages ) fuelled high-end real estate speculative purchases.

Low-middle income households have not seen their properties rise at levels experienced at the high end because post-2008 financial crisis mortgage lenders have been less flexible about who they lend to. Put another way, the real estate bubble is more likely with the high-end properties which tend to be bought by wealthy buyers with collateral, high income and are considered low credit risk and therefore can take advantage of the low-cost credit.

The high-end real estate bubble could be particularly acute

A lot of profits made in short-term speculative investments during the stock bull market could have been reinvested in what investors perceived to be safe haven investment, high-end real estate of the world’s major metropolises.

If there is going to be another house price crash it is likely to start with high-end properties, if so that would contrast with 2008 subprime mortgage crisis with low-end properties.

A recent UBS report notes that large amounts of easy money have fuelled real estate bubbles in the world’s major cities. The Swiss investment bank now sees the property markets in six global cities as being at risk.

In the 2018 edition of the bank’s Real Estate Bubble Index, the Swiss investment bank compiled a list of the major cities around the world that in or near bubble territory. Hong Kong was listed as the city most at risk of a real estate bubble.

Note that any city with a score over 1.5 is considered at “ Bubble Risk”, and right now those include two cities from Canada, one from Asia, and three from Europe. Hong Kong (2.03) tops the index this year, leaping past Munich (1.99), Toronto (1.95), and Vancouver (1.92) which all remain at bubble risk themselves. Amsterdam and London are the two other cities that score higher than a 1.5 on the rankings. Notice also that there are four cities that score just under the 1.5 threshold: Stockholm (1.45), Paris (1.44), San Francisco (1.44), and Frankfurt (1.43).

So if this is a real estate bubble (according to the Swiss Investment Bank) then is a correction imminent?

Howard Marks, an investor and writer, believes that the wider market is in its “8th inning”. He was referring to the aging bull market in stocks but his comment could also be relevant for real-estate. The real estate bubble will find its pin in the form of Fed rate hikes.

The view that Fed Chair Jeromey Powell will continue tightening the Fed fund rates (which has an impact on the global credit market) until something breaks could be true.

If so, that “something” is likely to be highly leveraged assets.

These are assets where the buyer relies on the availability of cheap credit to complete the transaction. So the moment the world’s central bank withdraws cheap credit from the market demand for that asset evaporates and prices plummet back down to earth.

“Historically, investors have had to be alert to rising interest rates, which have served as the main trigger of corrections,” UBS report.

According to UBS, the cracks are already starting to show at the top end of the market, with housing prices declining in half of last year’s list of bubble cities. Rising interest rates, growing political tensions as the crisis of affordability makes it harder for average people to live in these global financial centers have all be cited as potential risks to bubbly real estate prices.

Stagnant wages point to signs of a real estate bubble

In Hong Kong, you need to work 22 years to afford a 645 sq. ft (60m²) apartment, when that took just 12 years just a decade ago.
First-time buyers in London need to earn at least £77,000 a year to be able to buy their first house, which is double the £41,000 minimal national average income, according to a KPMG report.

Meanwhile, the insiders are selling before the real estate bubble bursts. Steven Mnuchin is selling his Manhattan co-op for $32.5 million.