A stock bull market by default 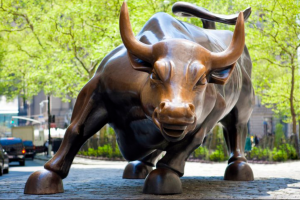 It is a stock bull market by default. In the absence of a more profitable alternative those investors who disregard the fundamentals closed their eyes and go long the market have so far outperformed their peers.

Buying the dip, in other words going long in the cheapest way possible, to date has yielded alpha returns. The all in, do nothing irrespective of the fundamentals approach that typifies passive portfolio management of assets has been a winning strategy.

So do traders/investors continue to “just buy the dip” in this virtually free money buy the dip scheme?

Trading volumes are plunging (fewer punters are buying the dip scheme) and volatility is virtually non-existent. The CBOE Volatility Index continues to hover around multi-year lows.

Furthermore, the fundamentals have become a kind of red herring with respect to forecasting the market’s trajectory. Is it wise then to continue ignoring flashing red fundamental? For example, the fact that the major advanced economies of the G7 remain in a quagmire, that consumer spending is waning and that we are on the cusp of the Fourth Industrial Revolution.

Should investors not worry about the next generation of smart machines controlling the less smart machines of the previous industrial revolution and thereby displacing humans from the production process at an alarming rate.

“I don’t see the technological change slowing down. It is a phenomenon that is here to stay,” said Loretta Mester, president of the Federal Reserve Bank of Cleveland in an interview. Indeed, the genie is already out of the bottle.

Many businesses could be facing a Darwinian choice; adopt new cost saving technologies, alternatively do nothing and be undercut and driven out of business by a more efficient technologically advanced rival. The Amazon business model could become the norm.

“How does society sustain itself when there are more machines and fewer jobs?”, added Mester.

Perhaps this is the paradox of capitalism; business’s endeavor for greater profits might eventually kill the goose that laid the golden eggs, consumption.

Maybe humans will be paid not to work, the basic universal income idea. If the robotic labor force is ten times more productive than flesh labor then business can afford to pay higher taxes. That would finance a universal income which would also enable redundant workers to consume. It is a rather bizarre futuristic vision of a world where robots slave away 24/7 to produce for their industrial masters and where the masses of redundant flesh labor (no longer of use in production) are paid to do nothing.

So at the bottom of the food chain, there is universal basic income (the people’s QE) maintains some type of social stability and higher up the food chain QE sustains a stock bull market by default.

Few investors today want QE to end. At a recent investor breakfast in Stockholm, when asked how many subscribed to what we call the “central bankers’ and economists’ view” that fundamentals were now strong enough to permit a very modest dialing back of central bank QE, not a single one of the 25 present raised their hand.

Then could this stock bull market by default continue?
If you would like to know more and develop an income from stock market and forex trading then take a look at my Wealth Training Company Events.

We are unlikely to see a rotation from equities into bonds, bearing in mind that bond price is already too high and the low yields are unattractive. So the pension funds, who are not permitted to buy gold, with the exception of gold stocks would probably not want to pile into a bond bubble.

Another factor in the equation is that QE is limited to a number of available assets the central bank can purchase. Put another way, there is only a finite amount of bonds and equities available. Moreover, the BoJ already owns 90% of the Top 10 Stocks and the entire Japanese bond market.

Whats more, the BoE is buying £375m of bonds per week in the most illiquid markets, according to FT. What has the Bank of England’s corporate bond buying achieved?

So if governments are not willing to borrow any more (and that is a real possibility due to declining tax revenues and ballooning deficits) the central banks will run out of assets to purchase and QE will eventually run aground.

Moreover, geopolitical uncertainties continue. If US President Trump embarks on his nationalist crusade of “America first” that will lead to trade wars. “I want tariffs and I want someone to bring me tariffs on China”, said Trump. “For the last six months, this same group of geniuses comes in here all the time and I tell them, ‘Tariffs. I want tariffs.’ And what do they do? They bring me IP. I can’t put a tariff on IP,” Trump reportedly said, referring to intellectual-property theft.

Eventually, the fundamentals catch up. A potential trade war could tip global economic growth in reverse, QE could run aground and a sovereign debt crisis could trigger panic selling in the bond market. The end of a stock bull market?

During the Great Depression of 1929 all asset prices (bonds, equities, real estate collapsed and the government forced the public to sell their gold to them at a discount price.

With the central banks out of ammunition to combat another financial crisis who would come to the rescue when the next crisis occurs?