Seeing with a mind’s eye into the future a stock market sell-off could be weeks, or a few months away. A sharp stock market sell-off (crash) could dominate future media headlines as September drifts into October and then early November 6 when US midterm elections is scheduled to take place.

If I am bang on the money then this imminent stock market sell-off will make the previous February stock-market sell-off which I correctly forecasted in a piece entitled, Financial Smash-Up Heading our way look minor by comparison. 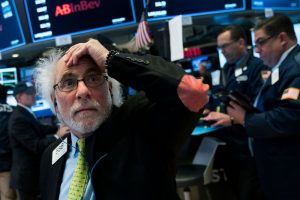 But this next stock market sell-off is not solely based on a chartist scary parallel of the DJIA 1928-29 and DJIA current period. For those of you who like to identify trends, trading opportunities by looking at previous price movements and volumes then the chart here will raise the hairs on the back of your neck.

Notice that just before the Great Stock-market crash of 1929 the stock bull market appeared invincible, climbing the escalator upwards, then there was a slight sell-off, stocks headed back up again during the Summer of 1929 but only to crashed in October of that year.

Fast forward to today and a similar trend emerges, a stock-market sell-off in February followed by a roaring DJIA Summer bull market rally then as we enter September, October, which is notoriously bad months for stocks could history be repeating itself?

This is seasonally the most volatile month for stocks. Apart from the last stock-market sell off in February DJIA stocks have been climbing the escalator steadily upwards. However, if history is any indicator, that could be about to change.

October is the month with the highest share of daily moves of 1 percent or more in either direction for the S&P 500, according to 50 years of data compiled by Bloomberg.

So history shows October to be the most volatile month.

But forecasting the next stock market sell off by studying historic price movements has its limitations, after all quoting the maxim “History doesn’t repeat itself but it often rhymes,”

The cynics among you will say that looking at historic price movements to forecast the trajectory of stock prices is like driving a car looking only in the rear-view mirror.

So then let’s put the high-beam on and look ahead at some forward indicators to gauge whether the next stock market sell off is imminent.

The CBOE Equity Put/Call Ratio, a good forward indicator, spiked in the last week which could be interpreted as an imminent stock-market sell off.

Why?
The CBOE Equity Put/Call Ratio measures the volume of bearish bets in relation to bullish wagers. A high CBOE suggests that future traders are betting bearishly on the short term trajectory of prices.

Futures traders tend to be ahead of the herd when it comes to forecasting bouts of volatility. So monitoring futures traders could give us a heads-up where stock prices could be heading.

During the last stock sell off in February CBOE Equity Put/Call Ratio was at a low of 0.48 on January 17 then the CBOE started climbing during the next few weeks (before the stock-market sell off) and by February 9, in less than a month, the CBOE reached a high of 0.88. Notice how the CBOE is yet again quietly off to the races.

So what do these sophisticated futures traders know that we don’t?

If profiting from the longest bull market in history was all about front loading the central bank’s unprecedented quantitative easing (QE) bond purchasing program then the binging of QT could mean the inverse. Stocks could be on the cusp of another stock market sell off. Perhaps “the next bear market will be the worse in our life time,” according to billionaire investor Jim Rogers.

Remember anything worth it is politicised. Energy is politicised, the “free media” is politicised and so too is the Fed’s monetary policy. So does the Fed view the current sitting US President Trump as an asset or a liability? If you believe it is the latter then the Fed’s finger is on the QT trigger and about to be squeezed in what could be the catalysts of the mother of all bear markets.

Yes, Trump, the fall guy narrative is starting to make sense. The calvary is being mobilized, the controlled mainstream media is tarnishing the Trump presidency with one negative story after another. Moreover, former President Obama has broken his silence to attack Trump. The stage is being set for a showdown leading up to the November mid term election.

Perhaps the scariest chart of all which suggests that a stock-market sell off is imminent is the Fed’s QE unwind at work.

So it is no longer speculation, the Fed is now pulling the QT trigger, and a stock-market sell off crash could be imminent. Since the start of QT, the Fed has sold $252 billion of assets. Moreover, as we enter the mid term elections QT is likely to accelerate. But if the Fed decides to do QT then it can’t do rate hikes too, which means precious metals is starting to look like a bargain.

The next few months could be interesting.