Trade war first shots were fired last week with the US Trump administration imposing $34 billion of tariffs of Chinese goods on Friday (July 6). US Customs began collecting the import duties at 12:01 am. Founder of the world’s largest hedge fund Ray Dalio tweeted, “the first day of the war” with China has begun. 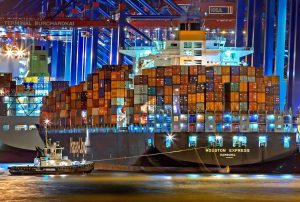 Sun Tzu’s (ancient Chinese general, military strategist) The Art of War is studied by senior business executives and military personnel in the East and the West and it could give us an insight into how these trade war first shots will play out going forward. Sun Tzu advise is to ”strike effectively and quickly” and that is precisely what we are seeing occur between the world’s two largest trading partners, China and the US.

Soon after smoke left the US’s gun barrel, following the first batch of $34 billion of Chinese goods, Trump then decides to fire a shock and awe second round with his announcement of an additional $500 billion trade threat on Chinese goods. Smoke could already be seen billowing from China’s stock market.

China Shanghai Composite Stock Market Index is down approximately 20 percent since the trade war first shots. Moreover, the Chinese Yuan is sinking. Capital flight from China is worsening as capital seeks safe have to shelter from the trade war.

But China, an ancient civilization, that once considered anybody on the other side of the Great Wall of China as barbarians will not be easily intimidated. Trump’s Godfather Marlon Brando style of doing business, drag your opponent to the edge of the cliff, make them see certain death, leave them there until they are shaking with fear and then pull them back from the brink and say let’s do a deal might not work with China.

So with these trade war first shots showing no signs of a ceasefire China’s Xi Jinping wasted no time to makes his strike. China took strategic aim at Trump’s red states and pulled the trigger. The first round of China’s retaliation sanctions were targeted on US farmers (soybean, fruit, pork and other US agriculture produce), put another way Trump’s base. China’s trade war strategy could be to try and sway the US midterm election, scheduled for November 6.

“Add that to the pile of tariffs and counter-tariffs growing across the Atlantic and North America, and the value of trade covered by the economic wars that President Donald Trump has launched will race through the $100bn mark by the end of this week,” reports the FT.

But that is just the starter, Trump’s China-US trade war could soon top $600 billion. Moreover, the Trump’s trade war on auto could be worth another $600 billion. When you factor in the collapse in multilateral trade agreements like NAFTA you can see how this could escalate to a one trillion plus trade war.

A Trump inspired trade war means that major exporting nations like China are in the firing line. The billions wiped of Chinese stock could just be the start of a new trend as capital flights from China and other emerging economies continue. These trade war first shots have put China’s market already deeper into bear territory.

“The bigger the size (of imports facing tariffs), the bigger the potential that the GDP impact is larger than a linear extrapolation would suggest,” said Aidan Yao, senior emerging Asia economist at AXA Investment Managers in Hong Kong.

A trade war will also have secondary effects on confidence and investment.
Global supply chains will now need to be re-examined. It is difficult to fully access the impact of a trade war, there are many moving parts. For example, how adversely impacted would the wealth effect and corporate financing be as a result of a trade war is still unknown.

“The risk is we underestimate the impact based on these simple back-of-the-envelope calculations,” said a securities analysts in China.

But perhaps it is no surprise that stocks in the west are reacting upbeat to a trade war, bearing in mind that famed British banker Nathan Mayer Rothschild coined the trading phrase (over two centuries ago), “buy on the sound of cannons; sell on the sound of trumpets.”

Put another way markets tend to panic at the outbreak of wars, trade wars and that “the sound of cannons”, present a good long-term values.

Furthermore, once a conflict, a trade war, comes to an end, investors/traders become optimistic which then drives asset prices to elevated levels and that is when traders/ investors might consider selling. So the contrarian investors say buy when the trade war first shots are fired and other pundits are recommending that investors should just sell and hold onto cash.