The US-China trade war timeout could be interpreted as neither side being able to secure what they want but at least avoiding the worst-case scenario, albeit in the short term, of escalating trade tensions.

So here are the main points of the US-China trade war timeout that have come from “the most anticipated dinner between the US and Chinese presidents in years”, Bloomberg.

The US will leave existing tariffs on $200 billion of Chinese goods at 10 percent and refrain from raising that rate to 25 percent as planned on Jan. 1.

What has the Trump administration gained from the US-China trade war truce? 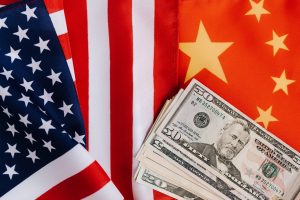 “China has agreed to reduce and remove tariffs on cars coming into China from the US. Currently, the tariff is 40%,” Tweeted D.J. Trump.

But President Trump tweet was not immediately confirmed by Chinese officials. Moreover, mainstream is either under-reporting or not report at all whether China has agreed to reduce tariffs on US cars. So are auto stocks rallying for no good reason?

In July, China reduced tariffs on US cars from 25% to 15%, but as summer trade negotiations fell apart they later added on a 25% additional retaliatory duty in response to U.S. tariffs on Chinese goods.

But the devil is in the detail and with that being scant it is unclear how more Chinese buying of American agricultural and energy will actually dent the US’s massive trade deficit which has widened to $53 billion and keeps rising despite the tariffs.

Also coming out of the US-China trade war timeout is China’s pledged to clamp down on the synthetic opioid fentanyl.

The number of US deaths from overdosing on synthetic (a heroin substitute) is so overwhelming that it is actually reducing US life expectancy with more than 70,000 Americans died from drug overdosing in 2017.

The US-China trade war timeout has a 90-day window to negotiation whereupon its hoped that both sides will reach an agreement “on a range of subjects”.

But if China, US don’t reach a pact US tariffs will rise to 25% and it is back to square one.

The most likely outcomes, in the short run, is that the seasonal Santa rally has been given the green light. Stock markets are rallying both in the US and China. Moreover, China’s Financial Futures Exchange decision to cut margin requirements for stock index trading to 10% for the CSI300 and SSE50 and 15% for the CSI500, the first such cut since Sept. 2017 is being interpreted as a green light for stock bulls and stock investors to get back into the market.

The presidents want the markets to enjoy Santa rallies first,” Junheng Li, the founder of the China-focused research company JL Warren Capital told Bloomberg. “And when February comes we can start worrying again.”

“This is a strong market positive result for the short term since over the past few days markets have been nursing hopes that a tariffs pause of this kind would happen,” Evercore ISI head of political analysis Terry Haines wrote in a note. “But it is not a ceasefire as some already are touting.”

“Neither side got their maximum demands and it’s not the first time in U.S.-China relations that both sides claim victory. Both sides avoided the worst-case scenario.

China could be playing the long game. Trump vowed to stop the American carnage, the decline of the manufacturing industry. So just how will the factories come back without the protectionist shield of tariffs and quotas. There is just no way that America workers can compete with Chinese workers who have no social security

Put simply, China trade war timeout is great for Wall Street but it is also a betrayal to Trump’s base

So if the China trade war timeout or better-said capitulation of American protectionism continues then Trump’s base could turn against their “strongman” who they will see now as being more of a showman. The US-China trade war which Trump touted would help rebuild American manufacturing and bring jobs back will then appear to his base as a charade, a US-China trade show.

But let’s assume the reality star made good US president Trump is a strongman and the China trade war timeout fails to deliver a deal acceptable to both sides.

So in this scenario the Trump administration would ratchet up its world trade war, then tit for tat retaliatory tariffs would fill the headlines as the economic heavyweight blaster away at each other’s economy.

Meanwhile, behind the veil, the Fed unloads its massive 4 trillion dollar balance sheet which sends bond yields soaring, the cost of borrowing spiraling which would also trigger a nasty recession/depression.

The Trump administration would have virtually zero chance of being reelected in 2020 during a severe recession/depression.

In short, a US-China trade war timeout is the capitulation of protectionism in the long run

Trump administration is unlikely to win the next election, either it all aboard the Wall Street Trump train (which will rattle the Trump base) or a few years of Trump depression. Who is going to vote for the latter?

The US-China trade war timeout could be a show maybe it is business as usual.