The lack of volatility in these markets is all too surreal and what if the VIX (the volatility index) awakens with a volatility rage. Volatility rage could be tempted with another round of tariffs on $200bn worth of Chinese goods by the US administration, which is scheduled to be implemented today (24 September).

Make no mistake about it this US-inspired trade war of the century shows no signs of abating. The two heavyweight US-China are out on the ring with both fists flying.

What’s more, the VIX gauge is at an all-time low despite this escalating US-China trade war. 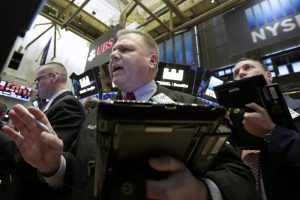 Could US-China trade war be a one-way street to a hot war?

China has just canceled US trade talks. The two countries were scheduled to meet for a bilateral trade summit with the aim of dialing back trade tensions. But the US administration’s decision to whack Chinese goods with a fresh round of tariffs (which targets 10 percent duties on $200 billion of goods) has convinced China that the US administration is not keen about de-escalating tensions.

“Everything the US does hasn’t given any impression of sincerity and goodwill,” Chinese Foreign Ministry spokesman Geng Shuang said at a press briefing Friday.

“We hope that the U.S. side will take measures to correct its mistakes,” added the Ministry spokesman. But that is unlikely as Trump’s approval rating on the economy is flying high.

Indeed, it’s a view being echoed by Ray Dalio’s, founder of Bridgewater.

“I think that the 1935-40 period is most analogous to the current period and that it is worth reflecting on what happened then when thinking about US-Chinese relations now.

To be clear, I’m not saying that we are on a path to a shooting war, but I am saying that we have to watch what path we are on, given these cause-effect relationships that history has taught us and that are described in the template. This excerpt describes how the economic and political conditions of the late 1930s evolved into the wars that followed, ” said Ray Dalio.

The greatest monetary easing experiment in the history of finance is not going to be thrown into reverse without consequences. I am not suggesting that Newton’s third law “For every action, there is an equal and opposite reaction” (based on the comforting pure logic of physics) should be applied.

Financial markets are a function of complex human behavior which at times can be completely unpredictable, quirky and erratic. Even algorithmic trading (which today makes up the most volume of trades) have programs written by humans.

Nevertheless, Volatility rage has been triggered by taper tantrums in emerging markets. The central bank’s monetary tightening has sent emerging markets into a bear market territory.

Moreover, capital outflows from EMS are likely to continue until investors get wind that the Fed will be standing pat on rate hikes. But with the latest economic indicators suggesting that the US economy is firing on all cylinders that is unlike to happen any time soon.

Perhaps a zombies apocalypse could also spark a volatility rage

In my last post, entitled “The Next Financial Crisis” I agreed with the school of thought that the next financial crisis could come from the corporate sector.

“I have referred to this risk in previous postings as zombie companies, these are companies with no sound business models, they have never made a profit but merely exist on the life-support machine of the central bank’s monetary easing policy of ultra-low interest rates.”

Furthermore, the Bank of International Settlement (the Basel based that oversees the world’s central banks) in their latest quarterly review
has come out and warned about the rise of Zombies firms (perhaps they are reading this blog).

The era of ultra-low interest rates that pursed post-financial crisis 2008 has littered the business landscape with zombie companies. So when the Fed and their western aligned sidekicks (ECB, BOJ, BOE) starting hiking base rates that will eventually feed through the credit market, thereby making corporate debt more expensive to service.

See the chart entitled Zombie firms are on the rise and survive for longer.

Zombie firms continue to steer resources away from healthier parts of the economy, weighing on productivity and economic growth, while stimulating deflation by keeping clearing prices lower than where they should be in the process reflexively acting as a brake to higher interest rates, according to the BIS report.

Zombies would also make a debt crisis even worse in a central bank rate hiking environment.

But perhaps a volatility rage could be spurred on by traders taking a heads-up from analyzing option trades. As the VIX hovers around its 52 week low it is starting to look like best long trade in the town.

A mystery trader is betting big on a volatility VIX rage

A known options trader is betting that the VIX is about to head back to where it was at during the market turmoil of February, reports Zerohedge.

“So convinced is the vol buyer that VIX is about to soar that he or she left a sizable mark on today’s order book, with VIX options volume soaring to more than double the 20-day average as a result of the purchase of 76,000 November $20 calls offset by the sale of the same amount of November $26 calls and approximately 95,000 October $13 puts.”

So a volatility rage and a stock market sell-off as the US midterm elections approaches could be on the cards.