Will the asset bubble find its pin

Will the asset bubble find its pin?

Everything is in a bubble. It is the most overvalued stock market in history by whichever matrix you wish to use. Bonds, particularly European bonds are in a bubble also. For example, European junk yields are now lower than that of US Treasuries.

Is Euro junk debt less risky than US Treasuries? I asked in a piece entitled, “The Deflating Bubble of Everything”, dated November 20, 2017. 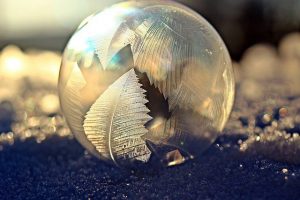 But it is not as if investors are “picking up pennies in front of a steamroller”. You can safely bet that it has been European Central Bank (ECB) that has been doing most of the bidder of Euro debt. But no Central bank can continue to be a buyer of last resort indefinitely.

Monetary policymakers are plodding along a treacherous path where the end of the road is a systemic collapse in the central bank’s fiat currency, a crisis of confidence in fiat currency, a mad max scenario.

So will the asset bubble find its pin in European bonds?
European bonds are so overbought that their yields are lower than US Treasuries. The European Central Bank ($36 billion) asset purchase programme has a lot to do with creating this bubble in European bonds.

The ECB could be facing two likely scenarios, withdraw from an emergency monetary policy. In other words, they could cut their massive monthly purchasing of euro bonds and let the asset bubble find its pin or risk a crisis of confidence in the single bloc currency, the euro.

Some market watchers think that the ECB will extend their massive QE program.

But already the blowback from QE is playing out on the foreign exchange. The single bloc currency, the euro is in freefall against the USD.

So the ECB could let the asset bubble find its pin, bearing in mind there is no case study in economics where an economy has devalued its currency to economic prosperity.

Massive devaluation of the Argentinian peso has not help Argentina to get back on the road to economic prosperity. The collapse of the Venezuelan bolívar to near nothing is yet another example where currency devaluation doesn’t help.

Furthermore, a modern example of a G7 economy debasing its currency would be the UK. Over the last decade, the GBP has depreciated approximately 50% against the euro and even more against the USD. Despite the massive depreciation in GBP the UK economy is the slowest of the economies in the G20.

So central banks might prefer to let the asset bubble find its pin rather than risk further debasement of their fiat currency which could risk a full-blown currency crisis.

Will the asset bubble find its pin despite recent second-quarter corporate earnings beating estimates? Some market watchers believe so. It has been a blockbuster quarter, in terms of earnings, 83% of companies have reported EPS earnings that are above estimates. The recent earnings season has seen the highest percentage of corporates to beat earnings since FactSet began tracking this metric in Q3 2008. But corporate earnings are backward looking and they have yet to feel the impact of a trade war.

Maybe the asset bubble find its pin in the form of a trade war?

While the S&P remains inert to a trade war thus far perhaps that is going to change going forward. Indeed, the world’s biggest shipping company Maersk is in the gunsight of the trade war.

Maersk (based in Copenhagen) is already feeling the fallout of a new protectionist environment and has shed one-third of its value. Trade protectionism means less demand, and history suggests the shipping industry will struggle to make the necessary supply cuts.

The company recently announced plans to temporarily scale back its service between Asia and North Europe. With freight demand under pressure that too could impact all other business and services downstream from shipbuilding, the engine builders who propel the ships, commodities, companies whose activity is the construction of ports etc.

Commercial real estate prices are in trouble and could be the new subprime mortgage crisis of 2018. The ongoing retail apocalypse is spiraling out of control.

Approximately, 77 million square feet of retail space is currently underutilized with up to 9,000 retail stores could close by the end of the year.

The Amazon model means that tomorrows retailers don’t have a chance. Amazon’s founder Jeff Bezos who is now the richest man on the planet has not reinvented the wheel. What he has done brilliantly is employ cutting-edge technology to connect buyers with sellers in the most cost-efficient way. But are we in the late stage of capitalism consuming itself in its constant endeavor to cut costs and make profits?

Perhaps the asset bubble finds its pin due to great social, geopolitical turmoil

In the US counter, social movements are gathering momentum. The 99% are calling for a revolution, an ambush on Wall Street. They are calling the president a traitor, weak, fearful, illegitimate and advocating a revolution which in their words, “is not only justified. It is our collective duty.”

In Europe, further austerity in the South (which is probably inevitable to prevent a crisis of confidence in the euro) could rip the EU apart.

The rise of European nationalism could be unstoppable if the economy goes through a deep recession. Voters might ditch the EU in favor of the idea that charity begins at home.

On the geopolitical front China’s militarization continues and at some point, the US will either have to back down as the dominant power in the Pacific or fight.

So tomorrows financial headline could read the asset bubble finds its pin. But just what that pin will be is unclear.