The impact of world trade war 1 has recently been weighing on investor sentiment and it is for good reason. First shots of a trade war were fired March 22 with Trump’s $60 billion tariffs on Chinese high tech and other Chinese goods impacting 100 categories.

So it is no longer political rhetoric a world trade war is underway. The Trump administration, now surrounded by generals and hawks, is riding on the torrent of protectionism.

USD hegemony fightback is in motion. America is re-industrializing, rebuilding its manufacturing behind a wall of protectionism. The analogy of the dollar propped up like a stool on three legs, Treasuries, petrol dollar and the military is about to add another pillar of support, manufacturing.

But was it China who planted the seeds of a world trade war a few years ago when its officials public said that US paper (treasuries) is a “piece of paper” backed by nothing?

So the era of junk goods in exchange for shaky debt is over and the impact of a world trade war with China could even stabilize the dollar as world reserve currency by adding another leg to support the dollar, US manufacturing (a chair is more stable than a stool).

Was the US President Trump permitted to take the reins and push his populist nationalist’s agenda because it serves the puppet master’s interests-to keep USD on the throne? 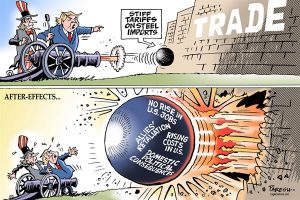 As we can see Trump is willingly prosecuting a trade war and his hawkish Defense Secretary James Mattis (who is no been counter) would probably eagerly direct a kinetic war to protect US interests (dollar hegemony).

The impact of a world trade war, which is referred to by US President Trump as reciprocal tariffs or mirror tariffs will throw a spanner in the wheels of world economic growth, according to a recent IMF report.

IMF published simulations of a 10 percent extra US tariff on all imports of goods from the rest of the world on its global economic model. In short IMF model concluded that such a tariff would be negative for US GDP reducing it by about 1 percentage point in the long term. Moreover, the rest of the world could experience economic output reduced by 0.3 percent. There would be no transfer of output from one region to another.

Political instability could be a secondary impact of a world trade war.

The economic damage that US tariffs will cause on China and the EU’s economy could rally support for popular nationalism. In the latter, it could be the political catalysts that dismantle the EU as member countries of the EU trading bloc look across the English Channel to the UK and envy the favorable trading terms that Britain has secured with the US outside the EU.

Other member countries of the EU, already rattled by Brussels’s budget fiscal discipline might then calculate that they are better off outside the EU. The impact of a US led world trade war could spur on the popular nationalist movement in Europe. With Britain leading the way providing the Brexit template to leave the European trading bloc and political union the next domino to fall could be Italy.

Already nationalist popular parties have taken hold in Italy with the Five Star Movement and the far right winning in the recent March Italian elections. So with high youth unemployment in the south and immigration tension in the north is a cocktail for a rise in popular nationalism on the continent. Moreover, the impact of a US trade war on an already politically fragile EU might be the final straw that break’s the camel’s back.

Think about what this could have on euro assets, the single bloc currency the Euro would not survive if the EU were dismantled.

The impact of a world trade war with China (the US’s second-largest credit) could easily escalate.

Despite rumors of China talking behind the scenes to calm tensions and avoid tit for tat trade sanctions I believe it will fail. Why?

Look at Trump’s recent appointments, Peter Navarro, a China-bashing eccentric is now lead Trump’s new National Trade Council. A world trade war with China is Trump’s preferred battle which could escalate into a shooting war if the US doesn’t accept the economic and political reality of China’s growing dominance in Asia and a dual-centric world-one outside the dollar hemisphere.

So this turbulent era of dollar hegemony fight back could have two phases, a world trade war leading up to another world war.

China, now heavily militarized isn’t backing down. March 26 the PetroYuan Futures went live with over 10 BillIon Notional Trades In First Hour. What’s more, mainstream media is being very quiet about it. The petrodollar leg is being kicked.

Another impact of a world trade war is the drying up of liquidity. Capital is free-flowing it will move where it wants to go. What if investors gravitate away from a dollar-centric hemisphere and start storing their reserves in Petro Yuan because the USD keeps depreciating?

Then demand for US Treasuries would collapses which would push their price down and send their corresponding yields sky high. For the US government that makes servicing debt more expensive. So a less known impact of a world trade war is a liquidity squeeze as the US second largest buyer of treasuries, China suddenly becomes absent.