The worst case-best case scenario analysis gives forecasters some kind of hedging when they are trying to predict the future.

But traders, investors, and hedge fund managers spend their entire working life buying or selling assets at the current market price because they believe that the future price will move in their favor. In short, they are all trying to live today in the future.

Forecasting the future is a “mug’s game”, according to English author Douglas Adams.
Moreover, the future has never been so uncertain.

On the financial front how will the world’s largest monetary easing experiment end? Will the path to the central bank’s monetary policy normalization be smooth?

With respect to geopolitics, in Europe could we be witnessing the beginning of the secession of nations on the continent? Will the North Korean missile crisis escalate into a kinetic war?

So perhaps now more than ever would be prudent for investors to take a deeper look into the worst case-best case scenario analysis.

What would be the worst case-best case scenario with respect to the central bank’s policy normalization?

A continuing path of rate hikes tend to drive the yields up and bond prices down.

A Fed fund rate hike and a corresponding rise in bank rates increase the opportunity cost of investing in bonds, which is the interest that could be earned on cash held in a deposit account. So capital rotates out of bonds into deposit accounts which tend to drive bond prices lower and their corresponding yields higher.

This market dynamics of a rate hike also plays out in the stock market. So when the Fed signals higher interest rates that also tends to send stock prices lower. Moreover, heavily indebted companies (companies which are highly leveraged) are more vulnerable when interest rates go higher. In short, highly leveraged assets, particularly junk bonds are susceptible when the central bank moves towards monetary tightening.

So the best case scenario would be some type of correction in the price of risk assets (stocks, junk bonds).

But what if monetary normalization leads to a worse case scenario?

Investors, people would lack confidence in the fiat currency. Hyperinflation would become a problem because the exchange value of the currency would collapse. This scenario could lead to a full-blown monetary crisis and a collapse in asset prices, particularly those that are highly leveraged(real estate).

The worse case scenario would mean a worthless fiat USD, but we would probably see war before that happens after all the king usually doesn’t give up his throne without a fight.

With respect to Europe, political risk is raising its head again and it might also be prudent to do a worst case-best case scenario analysis. 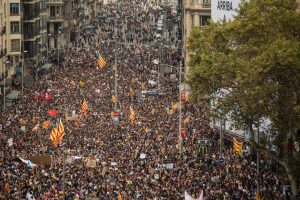 Let’s assume the latter, that economic interests triumph over ideology. So the Catalans decide to back-pedal the Spanish independence idea. Catalonia is already bleeding capital. Spain’s third-largest bank, CaixaBank has joined the exodus from Catalonia.

Perhaps then economic reality will act as a damp squib on Catalonian independence.

Furthermore, economic reality might also be a damp squib on Brexit.

In short, what if a marriage of convenience prevails and that after a period of economic arm-twisting the Catalans decide to remain in Spain and the UK decides to stay in the EU?

Then Spanish risk assets would be a bargain and so too would GBP.

But that is assuming that the populace thinks like investors where profits nearly always come before ideology.

The worse case scenario would be that the ideology of self-determination, secession spreads beyond Catalonia to other European states.

Perhaps that is not too far-fetched, bearing in mind that there are at least seven independent movements that could potentially destroy the EU.

These European political movements could act as headwinds on Euro bonds and the single bloc currency, the euro. So they are worth tracking.

Onto Asia, the North Korean missile crisis continues to boil. So the worst case-best case scenario analysis is worth examining here too. A missile crisis is brewing and Donald Trump is no JFK.

President Trump is the wildest of wild cards. Just take a look at the events/facts.

Business leaders have walked away from Trump. Even Trump’s own Secretay of State Rex Tillerson has called Trump a moron.

So we have a dysfunctional administration in the White House (that is an apolitical comment). Trump’s latest comment on North Korea.

You guys know what this represents?” Trump asked reporters. “Maybe it’s the calm before the storm.”
REPORTER: “What storm Mr. President?”
TRUMP: “You’ll find out.”

Trump hints at the military action as he says ‘only one thing will work in North Korea’.

The Worst case-best case scenario seems rather obvious with the latter being that Trump still thinks he is a reality TV show host. He thrives on grabbing attention by terrifying the world with his tweets.

But here is the worse case scenario; Trump is both mad and bad. In other words, this kind of reality show we are living is, in fact, the reality. So could we be on the cusp of WWIII and about to get a peek into hell?

These are crazy times. Predicting the future is even more bizarre. So forecasting with worst case-best case scenario analysis could help you from losing the plot. Investors who can keep sane in these mad times are likely to do well going forward.

Keep ahead of the game with forex and stock market training from The Wealth Training Company.